Scopa chair Hlengwa to apologise to Mavuso after a heated confrontation. 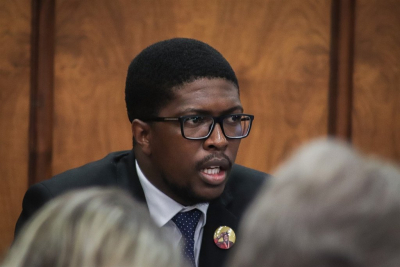 Chairperson of Parliament's finance watchdog the Standing Committee on Public Accounts (Scopa) Mkhuleko Hlengwa will tender an apology to Eskom board member Busisiwe Mavuso after a heated confrontation over the state-owned power utility.

Hlengwa came under fire this week following the clash with Mavuso during a Scopa meeting. Mavuso was asked to leave the meeting after she said that the ANC-led government created "the mess" that Eskom is in.

Since the incident, Hlengwa has remained mum on the matter, but after meeting with the national executive committee (NEC) of the IFP on Monday, he said the situation could have been "handled better".

"Whilst the NEC has accepted my explanation and upholds that the rules of Parliament were correctly invoked insofar as the construct of Scopa is concerned, the party asked me to reflect on the manner in which these rules were applied, and to give due regard to how Mavuso may have felt, considering the sentiments she expressed on Radio 702 on Monday, 25 April 2022.

"I have done this. Accordingly, I wish to express an apology to Ms Mavuso; which I will convey to her in due course. I accept that the situation could have been handled better," he said in a statement.

The IFP NEC requested a briefing from him, and Hlengwa thanked his party for the guidance on the matter.

Regarding the DA’s complaint, Hlengwa said he looks forward to appearing before the Powers and Privileges Committee, should he be asked to do so.

"While my exchange with Eskom during the Scopa meeting escalated in the manner that it did, it was an exercise of my responsibility as chairperson to caution against attempts to draw Scopa into partisan politicking in the discharge of its work," he said.

Furthermore, Hlengwa said boards and executives of all state-owned entities have a fiduciary responsibility in law.

"The board of directors of Eskom are the accounting authority of Eskom and thus carry the burden of responsibility and accountability. Oversight and accountability are often uncomfortable, especially when so much is wrong in the country, but they are a necessary exercise of our constitutional and democratic dispensation.

"Those who hold office through election, appointment or deployment must accept that they will be held accountable for how they exercise their duties, and for the performance of their respective entities," he said.

Godi believes Hlengwa let his emotions get the better of him.

"The last line of defence is the chairperson who should control the meeting, but if he is engaged in an emotional spat, he has let himself and the committee down.

"This has unheard of and has never happened, therefore. It is uncharted territory and I am not sure what will happen to him. He was batting for the ANC, and they are likely to defend him and spare him the humiliation of appearing before the Ethics and Privileges (Committee) of Parliament."

More in this category: « ANC members affected by step-aside rule will not contest leadership positions. Friends and colleagues of GBV victims urged to speak up. »
back to top