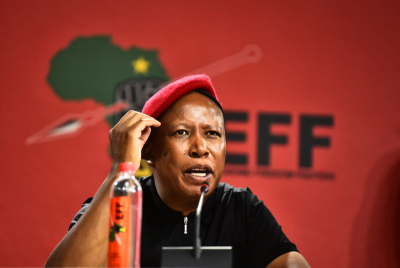 What type of sin did we [as black people] commit that is so bad that we deserve to be subjected to such permanent misery?

These were the disheartening words uttered by EFF Leader Julius Malema as he maintained that a majority of black South Africans have yet to obtain absolute freedom.

To emphasise his argument that the majority of black people still languished in poverty and could not lay claim to having attained true freedom, the EFF held its rally in Moretele View Park in Mamelodi, a township in Pretoria.

The venue is just a stone’s throw away from the Eerste Fabriek informal settlement, notorious for flooding. On 9 December 2019, floods destroyed more than 700 shacks in Eerste Fabriek and displaced about 1 300 people.

Despite the harrowing economic situation faced by the residents around the area, the venue was packed to capacity with community members applauding the EFF leader.

During his address, Malema accused the government of selling a false sense of freedom to the "downtrodden black mass", but not working towards ensuring that they truly attained economic emancipation.

"Our government officials drive past places like Eerste Fabriek informal settlement every day and turn a blind eye to these people’s living conditions, but when a flood happens and washes their homes away, then they want to pretend to care.

He claimed that some residents, who had since lost their lives in the heavy torrential rains in KwaZulu-Natal, had approached the EFF, saying they had identified a piece of land, and then proceeded to occupy it, only to be forced off and back to the low-lying flood-prone area in which they died.

"If our government truly cared about those people, it would have assisted them when they identified the vacant piece of land, and not sided with the private owner. Now government officials want to race to KZN and pretend to care with their crocodile tears. It's too late, life has been lost," said Malema.

He cautioned that, given that it was election season within the ANC, the party could channel the funds towards internal battles and not the flood victims.

The EFF leader also criticised the fact that instead of focusing on assisting the affected citizens who "cleary have yet to attain an ounce of freedom", opposition parties and civil society organisations were now "busy keeping an eye on the R1 billion relief package pledged by government to assist affected people in KZN".

Malema pointed to the skyrocketing unemployment rates, particularly youth unemployment which is at more than 60%.

More in this category: « SA is not yet where it should be, there is still a long way to go |Ramaphosa. Sibanye-Stillwater strike set for third month after unions reject latest final offer. »
back to top