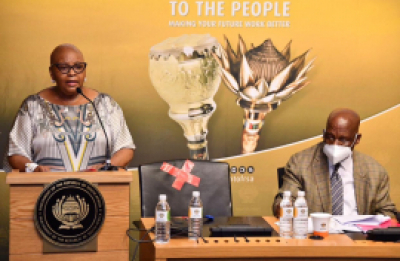 Parliament has asked the Constitutional Court to grant it a six-month extension to allow it to finalise a law that would allow independent candidates to stand as MPs and MPLs in the national and provincial elections.

The request by Speaker Nosiviwe Mapisa-Nqakula and National Council of Provinces chairperson Amos Masondo to the highest court in the land comes before the deadline set by the Constitutional Court two years ago.

The court-ordered deadline for Parliament to amend the Electoral Act is June 10.

The New Nation Movement approached the Constitutional Court two years ago in an effort to have the Electoral Act declared unconstitutional due to the fact that candidates cannot stand as lawmakers in the National Assembly and provincial legislatures.

The apex ruled in its favour.

But now Mapisa-Nqakula and Masondo have written to the apex court, saying there hasn't been the required public participation process.

The Bill was only presented in January, leaving Parliament with only five months to meet the deadline.

"Accordingly, the Presiding Officers of Parliament approached the apex court to seek an extension to enable Parliament to properly deliberate on the Bill before it and to ensure that citizens across the country are afforded an opportunity to meaningfully participate and share their views on the Electoral Amendment Bill," the legislature said in a statement.

"This Bill is amending the electoral system and therefore its enactment involves complex policy issues which impact all adult citizens. Several other laws, other than the Electoral Act, may need to be amended."

More in this category: « Sibanye-Stillwater strike set for third month after unions reject latest final offer. Corruption is undermining the gains of the democracy in South Africa. »
back to top