Future of Africa depends on the strengthening of the relations. 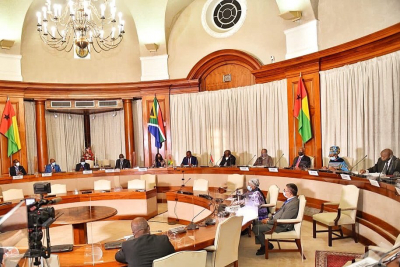 President Cyril Ramaphosa says the future of Africa depends on the strengthening and deepening of relations between countries on the continent.

Ramaphosa said this during his opening remarks at the State Visit of President of Guinea Bissau, General Umaro Sissoco Embaló, in Pretoria.

"This visit affirms the solidarity and friendship between South Africa and Guinea Bissau. Our common vision of a better Africa and a better world forms the foundation of our relations today and into the future.

"This visit is an important opportunity for us to consolidate the areas of cooperation that anchor our relations, explore new ones and address the challenges that will affect our people in the future," he said.

During his opening remarks, Ramaphosa said the visit presents an opportunity for the two countries to implement the General Cooperation Agreement signed by the two countries in 2008 which, he said, should also form part of implementing the African Continental Free Trade Area (AfCFTA) agreement.

According to Ramaphosa, other areas of cooperation for intra-African trade include that:

Turning to the impact of COVID-19, Ramaphosa reflected on the challenges African countries have faced in receiving vaccine doses.

"We meet as the world is counting the costs of COVID-19. We have the arduous task of rebuilding our societies, our economies and our people's livelihoods. Africa’s recovery depends on more of our people getting vaccinated against COVID-19.

"It is a cause of great concern that the global community has not sustained the principles of solidarity and cooperation when it comes to equitable access to vaccines. It is therefore, all the more urgent that African countries cooperate to manufacture its own vaccines and that we strengthen our health systems so that these vaccines reach the people who need them most, "Ramaphosa said.

"While much of the continent enjoys the benefits of democracy, peace and stability, there are still pockets of insecurity and conflict on our continent. The spate of unconstitutional changes of government in parts of our country runs contrary to the aspirations of [the African Union’s] Agenda 2063 of an integrated, peaceful and prosperous continent.

"It also sets back our common goal for silencing the guns. A goal that we set out to achieve as the African Union. We emphasise that any aggrieved party needs to engage in constructive and peaceful dialogue in good faith and within the confines of the law when addressing any conflict or area of dispute or disagreement, "he said.

The two Heads of State are expected to address the media later today to give an update on the deliberations of the State Visit.

More in this category: « More than 600 schools severely affected by KZN floods. SABC appoints Moshoeshoe Monare as the head of news. »
back to top