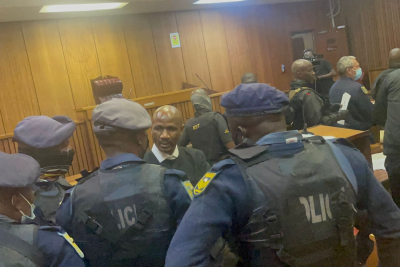 Defence advocate, Malesela Teffo, has been granted bail of R10,000 by the Hillbrow Magistrate's Court.

This after a Hollywood-style arrest in the Pretoria High Court on Thursday for failing to appear in court in January on a charge of trespassing.

Teffo is the legal representative for four of the men accused of killing Bafana Bafana captain Senzo Meyiwa.

The court cancelled the warrant of arrest, and postponed the hearing for the unspecified offence to May 27.

His attorney, advocate Tshepo Thobane told the court that his client had missed two previous court appearances because he had Covid-19 on both occasions.

Teffo faces charges of trespassing, after he allegedly visited the SAPS offices in Gauteng. The case is unrelated to the Meyiwa murder trial.

Earlier, Thobane told journalists that the dramatic arrest of Teffo inside the High Court in Pretoria on Thursday would be addressed fully in a media briefing.

"We will not be taking it up with this court (in Hillbrow) but definitely we will take it up, somewhere with another court. It will be upon his instructions. As he told me, we are not to talk much to the media until he is out then we will have a press conference," said Thobane.

He said Teffo's arrest did not affect the Meyiwa murder trial and Teffo would be representing his clients when the trial resumes.

More in this category: « Evidence proves Zuma was 'central' to Gupta capture of Eskom | State Capture Report. Government readies to go to market with its own set-top boxes. »
back to top