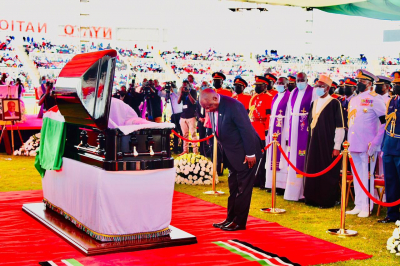 "We especially remember him for his leadership in uniting the people of Kenya and for us, as South Africans, we saw him in the mould in which we saw our own first president, Nelson Mandela, who sought to unite our nation and planted the seeds of the development of SA.

"You too have had a great president in President Kibaki, who has developed your country and helped to unite the people of Kenya."

Ramaphosa joined a number of leaders who paid their respects during Kibaki's funeral, which was held at the Nyayo national stadium in Nairobi on Friday morning.

He said: "As SA and the SADC, we were saddened to hear of the passing of President Mwai Kibaki. The news of his passing touched our hearts and our condolences were extended to you as Kenyans.

"We are here to extend and pay respects and our condolences to all of you as Kenyans and especially, President Uhuru Kenyatta and indeed the Kibaki family.

"We also wish that you could remember President Kibaki for what he stood for and for what he did for this great nation."

Ramaphosa said he made the trip to Nairobi to comfort his "brother Kenyatta and also to say that the relations between SA and Kenya continue to be strengthened in moments of celebrations and in moments of sadness".

Ramaphosa thanked Kenyatta for extending his condolences to SA on the loss of more than 400 people during the recent deadly floods in KwaZulu-Natal.

"We wish to join you as Kenyans as you remember your dear and beloved departed president. We remember President Kibaki for the leadership that he demonstrated, not only to Kenya, but also to the African continent."

Ramaphosa said: "We send our deepest condolences to the family of former President Kibaki and to the people of Kenya in general. We mourn with them and share in their loss."

He said Kibaki championed the cause of democracy and unity in Kenya and beyond.

More in this category: « Gauteng eyes cannabis processing to boost province's economy. Dlamini-Zuma calls for the effective disaster response in KZN »
back to top