Dlamini-Zuma calls for the effective disaster response in KZN 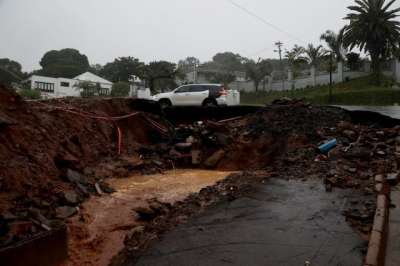 Cooperative Governance and Traditional Affairs (COGTA) Minister, Nkosazana Dlamini Zuma, has noted progress made in assisting those affected by the recent floods in KwaZulu-Natal.

The Minister on Thursday visited the KwaZulu-Natal Provincial Disaster Management Centre (PDMC) and received updates from officials, Mayors and MECs on the interventions unfolding in a number of communities.

Dlamini Zuma thanked the officials for the good work being done to assist communities affected by the recent floods. Interventions and support include the provision of shelters, which house those who lost their homes due to the floods.

The Minister was briefed on the work done to stabilise the situation and assisting communities affected by the floods.

In addition, the Minister was appraised of the unfolding plans to restore and rebuild infrastructure. These plans will go a long way to bring normalcy to the lives of communities worst affected by floods.

After the briefing, the Minister - accompanied by the provincial leadership - went onsite to see first-hand the devastation of lives and livelihoods meted upon communities by the floods.

She noted the multi-stakeholder work unfolding and that the work carried out brings to life the District Development Model (DDM) which is a comprehensive planning model for cooperative governance, which seeks to be a new, integrated, district-based service delivery approach aimed at fast-tracking service delivery.

Cabinet adopted the DDM in August 2019.

The floods follow the devastation caused by the COVID-19 pandemic, which had profound effects on several spheres of society.

Dlamini Zuma noted progress made by the various stakeholders directed at assisting by restoring and rebuilding the lives of the affected communities.

The Minister emphasised the need for an early warning system, which should include community education on disaster risk prevention.

She called for community education and awareness campaigns to be undertaken to capacitate communities to understand the various disaster risks.

"Efforts should be made to work with government institutions, partners and others to reduce disaster risk and losses and to ensure safer, sustainable communities.

"Even though there is progress made, there is still devastation that needs to be addressed urgently on the ground as people are looking at government for help, "the Minister said.

She called for targeted coordinated efforts to be intensified to restore and rebuild lives.

Meanwhile power has been reconnected to numerous areas in KwaZulu-Natal's eThekwini Municipality.

Power supply was interrupted in large parts of the city following floods that devastated the province and metro earlier this month.

In a statement, the municipality said power has been fully restored in the following areas:

"Power has also been restored to uMlazi Mega City. All that remains now is for various businesses in that area to indicate to our teams when to energise their businesses so that this is done safely," said the city.

"Teams continue to work tirelessly to restore power in other areas as well. The city appeals to the public still facing power outages, to be patient," read the statement.