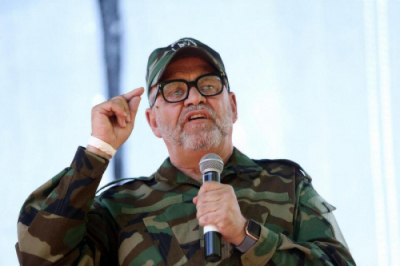 Months after he was dramatically arrested for contravening Covid-19 regulations, military veteran Carl Niehaus has been told to leave a three-day Umkhonto we Sizwe Veterans Association conference underway in East London, after testing positive for Covid-19.

Niehaus tested positive at the testing booth of the East London International Convention Centre where around 1 000 ex-combatants are gathering under the theme "Renewal, unity, welfare and discipline".

Department of Military Veterans spokesperson Lebohang Mothapa confirmed that Niehaus and another unnamed female veteran had been sent home.

Mothapa said: I can confirm he tested positive for Covid-19 on the 26th of April, at a testing site situated towards the parking lot. He got the results on the spot and was sent way immediately. Another lady from KZN was also sent away after testing positive.

Niehaus had been prevented from reaching the second booth which provided accreditation for entrance into the conference, said Mothapa.

A bitter Niehaus took to Twitter, insinuating that the positive test was part of a plot to kick him out of the conference.

Describing the preparations for the conference as chaotic, Niehaus tweeted: "This was all well-planned in advance: The testing center at the registration venue was all run by white males. It was like walking into an apartheid era trap! An utter disgrace."

He also slammed the organisers.

"In fact, the DMV is an utter disgrace!" he tweeted.

Asked for comment, Niehaus said the Covid-19 testing is illegal because the country is no longer in the state of emergency therefore testing should be voluntary not mandatory as it was at the conference. Niehaus, who revealed that he never vaccinated, said the organisers initially tried to exclude him by informing him that access would not be granted to those without vaccination certificates.

"They have tried every way possible to prevent me from participating in this conference. They first questioned my military veteran credentials and I fought that; I am registered on the data base under Gauteng. Now they used an illegal Covid-19 test," added Niehaus.

"We hired a private company to do the testing... It was not lily-white at all as Mr Niehaus implies. It was a mixture of blacks and whites."

Regarding the organisation of the conference, "we just experience delays caused by accreditation issues", Mothapa added.

She said the department believed that the conference would be incident-free, with security beefed up to maintain law and order.

Ten private security guards had been brought in guard the outer perimeter of the venue, while MKMVA had deployed 40 of its own security officers for inside the venue.

She added that the event was a consultative conference to unite military veterans.

Meanwhile, the conference, which was scheduled to start on Thursday, was hampered by delays and only kicked off on Friday.

More in this category: « Mkhwebane goes after SARS commissioner Kieswetter and Gordhan. Six soldiers killed in rebel attack in Central African Republic. »
back to top