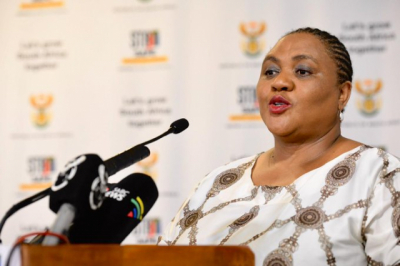 Didiza is currently on a campaign trail to put measures in place to fight the disease, which has led to outbreaks in KwaZulu-Natal, North West, Limpopo and Gauteng.

"We are particularly interested in Limpopo because there have been identified cases since 2018 up to now. We need serious intervention. Our role here is to work and give comfort to stakeholders, especially farmers, on how we are managing it."

Didiza said SA must contain FMD, as it has to protect its market share of livestock and ensure that farmers, "especially emerging black farmers, are protected as the market share is still higher at 11% of the total agriculture value chain".

"By containing the spread, we shall be able to manage the current ban on South African meat, as it has negatively affected agricultural output and revenue. As a result, we called a multidisciplinary team involving the Office of the Premier, Provincial Treasury, Provincial Economic Development, Environment and Tourism to see what is it that we are not managing, allowing this crisis to reach where it is."

The border between Kruger National Park, farms and households bordering the park have been attributed as a contributor to the spread of the disease in Limpopo.

"Buffalos are known to be high carriers of foot-and-mouth disease. Access to areas where buffalos are and their mixing with cattle leads to the spread of the disease.

"In addition, movement of livestock from identified restricted areas to others that were FMD-free are major contributors. The meeting agreed that it requires vigilance to limit the interaction between buffalos and cattle," said the department in a statement.

Mathabatha welcomed the intervention from the Minister.

"Agriculture is one of the pillars in the Limpopo Development Plan. Any matter that threatens this part affects the general economic outlook and the recovery of our province, hence the importance of this meeting.

"I have called upon the Departments of Agriculture and Rural Development, Provincial Treasury and Limpopo Economic Development to work as a multi-disciplinary team to attend this matter as a crisis. We need to claim back this share and not lose interest of our produce from international and national consumers,"he said.

The Minister also met with the Limpopo House of Traditional Leaders, led by Kgoshi Malesela Dikgale. They agreed on a quick interaction with other traditional leaders in Vhembe and Mopani within the next two weeks to spread the message of avoiding the spread of the disease.

Said Dikgale: "We would like to thank Minister Didiza for having considered us as a house and an important stakeholder. They are assisting us as leaders, since members of the community are not able to sell their livestock. This is not government’s problems alone; it is our own people who are affected and we are willing to partner to put an end to... foot-and-mouth disease through immediate meetings in Mopani and Vhembe districts."

The department said a team has been put in place to work on an emergency plan that will address the action to be implemented to make communities aware, and what they should do to help prevent the spread of the foot-and-mouth disease.

More in this category: « City of Cape Town may have to put on hold its plans to take over rail function. Ramaphosa reaffirms his commitment to attend to issues raised by traditional leaders. »
back to top