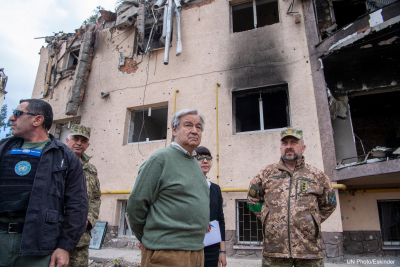 Russia's foreign minister has again urged the United States and NATO to stop supplying Kyiv with arms if they are "really interested in resolving the Ukraine crisis", Chinese state media has reported.

"If the US and NATO are really interested in resolving the Ukraine crisis, then first of all, they should wake up and stop supplying the Kyiv regime with arms and ammunition," Sergey Lavrov said in an interview with China’s official Xinhua news agency.

The US and several European countries have supplied weapons worth billions of dollars to Ukraine in its fight against Russian aggression. US President Joe Biden has asked Congress for $33bn to support Ukraine.

Moscow has repeatedly warned Washington against continuing its military assistance to Kyiv, accusing the US of "pouring oil on the flames" of the war.

The Kremlin had previously called Western arms deliveries to Ukraine a threat to European security.

Months into an invasion that failed in its short-term aim of capturing Kyiv, Moscow is now intensifying operations in Ukraine's eastern Donbas region.

China has avoided condemning Russia's invasion of Ukraine and defends its firm friendship with Moscow, with state media often echoing the Russian line on the war.

The shaky talks have not been held in person for a month.

The West has imposed wide-ranging sanctions largely cutting off Russia's financial sector from the global economy. Hundreds of multinational corporations have also exited Russia in the wake of the war in a blow to its economy.

European countries have pledged to cut reliance on Russian gas to deprive Moscow of revenue.

In his interview with Xinhua, Lavrov said that Russia could "retool" its economy to guard against potential "unlawful hostilities".

He added that the sanctions-hit country will focus on moving away from the US dollar and lean less on imports, while boosting its tech independence, Xinhua reported.

Moscow has pursued a "de-dollarisation" policy for several years, calling on partners such as China and India to conduct payments in other currencies.

Meanwhile, Ukrainian prosecutors say they have pinpointed more than 8,000 war crimes and are investigating 10 Russian soldiers for suspected atrocities in Bucha, where dozens of bodies in civilian clothes were found following Moscow's retreat.

The United Nations will not give up, but will "redouble its efforts to save lives and reduce human suffering," Secretary-General Antonio Guterres said in a Twitter post on Friday.

The UN chief said he was "moved by the resilience and bravery of the people of Ukraine. My message to them is simple: We will not give up."

"In this war, as in all wars, the civilians always pay the highest price, "he said.

Guterres has just returned from the war-torn country, where he visited the Kyiv suburbs of Borodianka, Bucha and Irpin nine weeks after Russia began its illegal and unprovoked war.

"When we see this horrendous site, it makes me feel how important it is [to have] a thorough investigation and accountability," he said Thursday, when he was in Bucha — where horrific photos of mass graves and executed civilians strewn in the streets sparked global outrage.

"The war is an absurdity in the 21st century. The war is evil," he said during his visit to Ukraine, where he also met President Volodymyr Zelenskyy.

More in this category: « Ramaphosa reaffirms his commitment to attend to issues raised by traditional leaders. United Nations condemns Mali's ban on French media. »
back to top