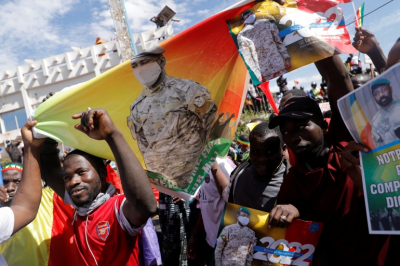 The UN High Commissioner for Human Rights criticised Mali's decision to ban French media outlets and called on its military rulers to reverse their decision.

"We are deeply dismayed by the Malian media regulator's decision to definitively suspend Radio France International [RFI] and France24," said a spokesperson for High Commissioner Michelle Bachelet on Friday.

"These suspensions are the latest in a string of actions curtailing press freedom and the freedom of expression in Mali, and come at a time when more, not less, scrutiny is needed."

Mali’s military leaders first imposed the suspensions on March 16, accusing the two broadcasters of airing false allegations about reports of human rights violations by the army.

On Wednesday, the High Authority for Communication announced those provisional suspensions would be definitive.

Journalist associations have denounced an increase in attacks and smear campaigns against reporters over the past year, in particular against representatives of French media outlets. Foreign and local reporters covering Mali have denounced a worsening of the climate for media professionals in the country.

"We didn't have this kind of scrutiny before," said a freelancer contributing to French media, who asked not to be named for security concerns. "The situation has got worse since tensions between France and Mali started to increase. It’s a political issue."

On Friday, the Committee to Protect Journalists also called on the authorities to reverse their decision to ban RFI and France 24.

Malian authorities' decision to solidify these suspensions indicates just how committed they are to denying those in their country access to information," said Angela Quintal, CPJ’s Africa programme coordinator, in a statement.

On February 6, French journalist Benjamin Roger, a reporter on assignment for Jeune Afrique, was arrested and expelled within 24 hours of his arrival in the Malian capital, Bamako. The authorities said the reporter did not have press accreditation. A week earlier, they announced it would become harder for media representatives to obtain a media permit.

Press accreditation has rarely been demanded until now," said Reporters Without Borders in a statement, "and lacking it has not prevented journalists from working freely."

On April 8, Reporters Without Borders marked one year from the abduction of French journalist Olivier Dubois, a correspondent for French publications Libération, Le Point, and Jeune Afrique. On March 14, the al Qaeda-linked Jama'a Nusrat ul-Islam wa al-Muslimin (JNIM), a coalition of armed groups, released a video showing he was still alive.

French aid worker Sophie Petronin was kidnapped in Gao in 2016 and released after four years. In 2013, Ghislaine Dupont and Claude Verlon, two journalists of RFI, were abducted and killed by gunmen in the Malian town of Kidal as they finished an interview with a Tuareg separatist leader.

Meanwhile, the UN denounced how such a situation is inducing those reporters who are still inside the country to practice self-censorship.

"The current climate is one with a pervasive chilling effect on journalists and bloggers," UN Spokesperson Ravina Shamdasani told reporters on Friday.

"Our office continues to document serious allegations of violations of international human rights law and international humanitarian law in many parts of the country, and we remain seriously concerned by steps to further shrink the already limited civic space."

Tensions between Mali and France have increased since a military coup led by Colonel Assimi Goita on August 8, 2020, that overthrew elected President Ibrahim Boubacar Keita, who was supported by France.

In June 2021, France, a former colonial power in the region, halted its joint military operations with Malian forces awaiting guarantees that civilians return to positions of power.

French President Emmanuel Macron announced he would start a withdrawal of troops, about 5,100 soldiers, stationed in the region since 2013 under its so-called Operation Barkhane spanning five countries in the Sahel – Burkina Faso, Chad, Mali, Mauritania and Niger.

In response to the army’s power grab in Mali, the Economic Community of West African States (ECOWAS) regional bloc and the African Union suspended Mali from their organisations and threatened sanctions.

In January, Malian Prime Minister Choguel Kokalla Maiga accused France of promoting insecurity and division in the country and expelled its ambassador.

According to Reporters Without Borders, Mali is ranked 99th out of 180 countries in the 2021 World Press Freedom Index.

More in this category: « Russia FM asks US, NATO to stop supplying arms to Ukraine. SA police service explain the arrest of defence lawyer Teffo. »
back to top