The working class in South Africa continues to struggle |Unions. 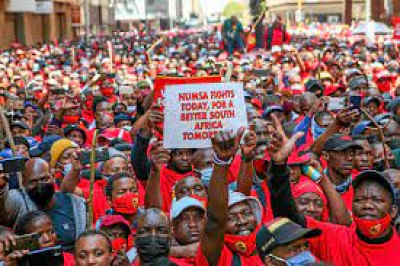 Workers' Day is celebrated in South Africa to commemorate the role played by Trade Unions, the Communist Party and other movements during apartheid.

Following the first democratic elections in South Africa in 1994, May 1st was inaugurated and officially recognised as a public holiday.

The struggle for better working conditions is linked to the struggle to overthrow apartheid and end segregation because South Africa's working classes were the most oppressed during the previous regime.

Today, Workers' Day in South Africa signifies the sacrifices made on the long road toward fair employment standards.

Numsa says despite the sacrifices made by many during the struggle for freedom, the working class in South Africa continues to struggle.

"Twenty-eight years after the first democratic elections catapulted the ANC into power, the working class in South Africa continues to be dominated by white supremacy," said the union's general secretary Irvin Jim.

Jim points out that nearly three decades after white supremacist rule in South Africa, the country's Black working class are languishing in crippling poverty, in poorly developed townships and informal settlements all over the country.

"Access to quality education and healthcare remains an unattainable dream for the masses, "said Jim.

"The Black and African working class are languishing in crippling poverty, in poorly developed townships and informal settlements all over the country. Access to quality education and healthcare remains an unattainable dream for the masses because the governing ANC has used its power to increase the power of a tiny capitalist minority, at the expense of the working-class majority. This is why we do not have much to celebrate as workers on Workers Day."

Numsa is accusing corporate South Africa of sitting on more than R1 trillion in cash reserves but is only investing a pittance back into the South African economy.

In last year's budget, National Treasury announced it would cut a whopping R50.3 billion from the healthcare budget over three years.

But the union's General Secretary Lerato Mthunzi says the struggle is beyond wage and working conditions.

"It is difficult for us to celebrate days like 'Freedom Day' and 'Workers Day' and therefore this year the mood is sombre, because we have nothing to celebrate. We have lost all hope and unfortunately, the new generation, which is coming, is also not inspired to join the profession.

"The nursing profession is endangered. Those who do join, the majority seemingly do so mostly out of desperation because they want a job," says Mthunzi.

In June 1952, almost two months after May Day, the largest scale non-violent resistance ever seen in South Africa.

The campaign – led by African National Congress (ANC) and the South African Indian Congress (SAIC) – was the first of its kind pursued jointly by all racial groups.

Three years later, the Freedom Charter was born, and the Congress Alliance was formed between the anti-apartheid forces of the 1950s. The Alliance consisted of:

However, the apartheid government then intensified its banning orders on any political activist belonging to the Alliance.

Walter Sisulu, Nelson Mandela, James Moroka and 17 others were tried under the Suppression of Communism Act. They were all sentenced to nine months’ imprisonment with hard labour, suspended for two years.

More in this category: « Zikalala hopes Mdlalose family's faith in God remained unshaken. Livestream: Cosatu hosting its May Day celebrations in Rustenburg. »
back to top