Mantashe laments manipulation of the outcome at the EC conference. 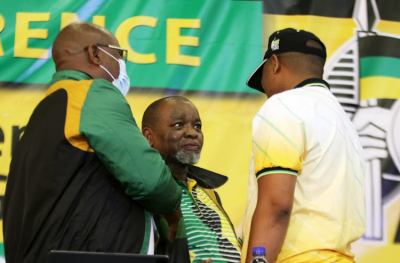 ANC national chairperson Gwede Mantashe has warned that if delegates attending the provincial elective meeting leave the East London ICC divided it will diminish the hope of renewing and rebuilding the ruling party.

He told delegates that they must focus on policy and not who will lead the party.

He said it was wrong that each time the party goes into a conference delegates must fight as battles rage over leadership positions.

"What kind of an organisation is that? Beyond conferences we must be together. When we contest we are not enemies of one another," said Mantashe.

He added that when new leaders are elected, the losing candidate must congratulate the winning candidate.

"We are sending a message to delegates that this was not war," he said.

He said the ANC cannot fight in a conference over elections of leaders.

"These delegates cannot fight to death on the basis of elections. If that is what you are here for, you are crying at a wrong funeral. You cannot have a conference focusing on elections. The conference should focus on policy. If you focus on elections whoever wins it will be a hollow victory. I am appealing to you to focus on policies. Fighting one another as if there is no tomorrow, as if we are enemies of one another that is self-destructive," said Mantashe.

He added that the ANC was a stronger faction than anyone.

People must work to build unity in the ANC.

While ANC members aligned with Babalo Madikizela, one of the Eastern Cape leadership candidates at the provincial conference, refused to enter the venue.

The Madikizela group was understood to be unhappy that the plenary session had been filled with "friends of conference" who support Oscar Mabuyane, Madikizela's rival for the party leadership in the Eastern Cape.

Mantashe, meanwhile, spoke strongly against people who manipulate processes, saying they must be dealt with.

"We can't fight every five years. Beyond the conferences we must be in the ANC together. When we contest one another we are not enemies of one another — this is not war but a conference."

Mantashe has also taken a dig at Eskom board member Busisiwe Mavuso after she blamed the governing party for the power utility's problems.

"Anybody who wants attention must insult the ANC. We put someone in a board at Eskom and then they decide to insult the ANC, saying: 'I have no responsibility it’s the ANC's fault'.

"But they sit in board meetings and get paid then act like they do not have responsibility," the ANC chair said in isiXhosa without mentioning Mavuso's name.

In an incident that took place last month, Mavuso walked out of a meeting with Parliament's standing committee on public accounts (Scopa).

She had a heated exchange with Scopa chairperson Mkhuleko Hlengwa after she said Eskom's current board and CEO, André de Ruyter, would not be the "fall guy" for the mess at the embattled power utility. She attributed the blame to the ANC-led government.

More in this category: « Group of ANC members heads to court over irregularities at EC conference. Ramaphosa and Macron discusses issues of mutual concern. »
back to top