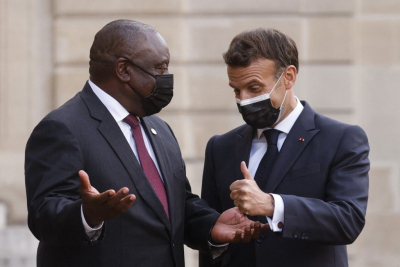 President Cyril Ramaphosa congratulated President Emmanuel Macron on his re-election in the second round of the French Presidential Elections on 24 April 2022.

Ramaphosa had a telephone call with Macron on Thursday, 5 May 2022 to discuss several international matters of mutual concern.

Macron has been sworn in for his second term as France's president at a ceremony at the Elysee Palace, followed by the firing of canons at the Invalides Gardens.

In a country where presidents rarely get re-elected, Macron won 58.5 percent of the votes in the second round in April against the far-right's Marine Le Pen, despite strong opposition to his pro-business policies and a proposal to raise the retirement age.

In a short speech on Saturday, he spoke of the need to innovate at a time of unprecedented challenges for the world and for France, and said his second term would be "new" and not merely a continuation of the first.

"We need to invent a new method together, far from tired traditions and routines, with which we can build a new productive, social and ecological contract," he said, promising to act with "respect" and "consideration".

Presidency said in a statement, Ramaphosa acknowledged the message of condolence and welcomed the offer of material support from Macron in the aftermath of the devastating floods in KwaZulu-Natal and other parts of the country.

A year ago, during a state visit to SA, Macron met Ramaphosa at the height of the Covid-19 pandemic to talk about vaccines and their manufacture in the country.

"Macron agreed to support the call for international vaccine buyers like COVID-19 Vaccines Global Access (COVAX) and Gavi, the Vaccine Alliance to procure COVID vaccines for Africa countries from manufacturers on the continent. This was necessary to ensure the viability and sustainability of Africa's emerging vaccine manufacturing capacity. The leaders also discussed other initiatives to strengthen relations between the European Union and African Union."

Macron has also confirmed France's willingness to work with the South African Development Community (SADC) mission in Mozambique, and to support the EU’s financial assistance to the SADC mission, read the statement.

Ramaphosa and his French counterpart also discussed ways of further strengthening relations between the European Union and the African Union.

More in this category: « Mantashe laments manipulation of the outcome at the EC conference. John Hlophe to appeal failed bid to set aside gross misconduct findings. »
back to top