No one is bigger than the ANC and factions must be collapsed |Ramaphosa. 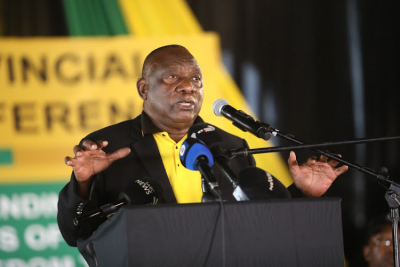 Mabuyane addressed party delegates in East London on Monday after being re-elected as the ANC's Eastern Cape chairperson during the party's elective conference.

He said Ramaphosa had championed renewal of the governing party and he must be given another five years to focus on this task.

Mabuyane said Ramaphosa was the president the country needed and the ANC leadership in the that province would make sure that he was re-elected to ensure unity and transformation of the party.

He called for unity and the renewal of the ANC, saying this would be the priority of the newly elected provincial leadership.

"We will continue with that unswerving commitment to the renewal of the ANC and we will lead where necessary as a province.

"This is the time we are working so hard to make sure that the ANC exists for another 100 years and even beyond," he said.

Mabuyane's victory comes after a tense elective conference that was characterised by legal action, a heavy security presence, several disruptions and disputes over the adoption of credentials.

Ramaphosa, who made the closing remarks on Monday, said there must be no purges in the party against those who were not elected.

In his speech Ramaphosa said this was the time for unity in the ANC irrespective of who had won.

Those who lost the election battle remained ANC leaders and must be given responsibility.

He said despite the branches coming with different preferences they should now rally behind the ANC.

The ANC remained the centre of political power.

Ramaphosa said the ANC must now strengthen its branches and other structures.

This is a significant boost to Ramaphosa's re-election campaign because the ANC in the Eastern Cape is the governing party's second biggest province after KwaZulu-Natal.

More in this category: « Livestream: Ramaphosa closes the 9th ANC Eastern Cape Elective Conference. Government wants to move faster on name changes for towns and roads. »
back to top