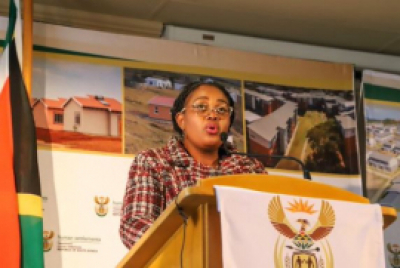 Human Settlements Minister, Mmamoloko Kubayi, says a national war room has been established to improve the speed and quality of housing delivery.

Kubayi said this when she participated in the department's budget vote at a mini-plenary of the National Assembly on Tuesday.

"To deal with the blockages and the slow pace of delivery, we have established a national Human Settlements War Room, with Dan Gorbachev Mashitisho, the former Director General of the Department of Cooperative Governance and Traditional Affairs, as the convener.

"In this work, he will be supported by a team of highly specialised individuals who will bring a broad range of much needed skills to the sector," she said.

Among the tasks that the War Room team will be ceased with, includes:

Kubayi said, meanwhile, that in addition to the technical capacity that will be brought in, the department has made some policy changes that are aimed at expanding the speed and quantity of delivery.

Support for those affected by KZN floods

It has been a month since the coastal parts of KwaZulu-Natal experienced extremely heavy rainfall, causing severe damage in the eThekwini Metro and the Districts of King Cetshwayo, iLembe, Ugu and Umgungundlovu.

Kubayi said more than 15 000 houses were damaged, and these were split between fully damaged houses and partially destroyed houses.

"The areas affected include Alfred Nzo, OR Tambo and Joe Gqabi district municipalities. The North West and Western Cape provinces were also affected by floods and fire respectively.

"Let me take this opportunity to thank Team Human Settlements in the manner they worked to respond to this disaster, a special tribute to the team that worked in KZN.

"I have received an updated report that so far the KZN team has complied with the required real time audit prescripts and I have urged the team not to drop the ball, as this will build confidence in our communities that we are spending their resources correctly and we are accountable.

"Those who are affected by such disasters require alternative shelter immediately and others want to repair the damage to their homes as soon as it is possible."

Kubayi said to make this possible, the department has introduced a number of new directives applicable to provincial departments and municipalities in order to change the manner of intervention in disaster areas.

"These directives include 24-hour turnaround period for the assessments of the disaster and fast-tracking of repairs through a voucher system, "she said.

More in this category: « Many of SA’s senior government officials not qualified for their job. Judgment reserved in AfriForum's appeal to overturn ban of old flag. »
back to top