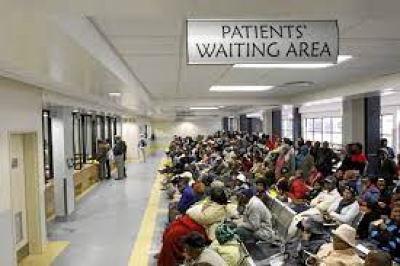 Health minister Joe Phaahla says that his department has budgeted R1.5 billion for National Health Insurance infrastructure projects in the coming year, as the government doubles down on its commitment to the universal healthcare scheme, despite numerous challenges and objections.

Tabling his department’s budget vote before a mini-plenary of the National Assembly on Wednesday (11 May), Phaahla urged all members of Parliament to support the NHI Bill, which is in front of the Health Portfolio Committee.

He said the bill was essential to realising the ANC's vision of universal healthcare in South Africa, and would work off the foundation currently being established for an integrated health system.

NHI spending has decreased over the last two years as the government pivoted its healthcare budget to deal with the Covid-19 pandemic. However, Phaalha has indicated that the NHI was not forgotten and that much of the Covid-19 spend was in aid of the NHI, rather than replacing it.

Notably, the minister said that the Covid-19 pandemic set the stage for the NHI, having facilitated closer cooperation with the private health sector.

This was done by sharing hospital bed availability and establishing a common platform for reporting on Covid-19 tests, and a common recording system for vaccination – wholly owned by the National Department of Health.

"Within this budget allocations made under NHI are essentially meant for strengthening the public health delivery platform – such as targeted infrastructure upgrades across the country, contracting private PHC doctors, acquiring of oncology services, and also adding more capacity for mental health services," he said.

An amount of R1.5 billion will be managed by the department to support various infrastructure projects in NHI pilot districts, he said.

"We also have a ring-fenced amount to prepare for implementation of the NHI such as the benefits design and pricing, provider accreditation, management of health products procurement, further development of the digital information systems and developing risk management and anti-corruption systems."

The minister said that progress has also been made with the Health Patient Registration system, which has now registered more than 57 million South Africans. Further work has been done towards the establishment of a single, portable patient record system with an interoperable digital system.

"We are working towards building a resilient health system since this is a prerequisite for the NHI, and based on the lessons learned from Covid-19 pandemic," Phaahla said.

He also told a virtual mini-plenary of the National Assembly the "measures that government took utilising the Disaster Management Act were meant to protect the people of South Africa against the harshest impact of Covid-19".

Phaahla said it helped to flatten the curve and ensured health services could cope, adding South Africa's health services, even though it struggled during the first three waves of infections, "never collapsed under the pressure".

The government's plans to introduce the NHI have been met with backlash from across medical sector. While many agree with the concept of universal healthcare, the realities of South Africa’s economy and its dysfunctional governance are an obvious stumbling block to implementation.

According to a 2019 Socio-Economic Impact Assessment for the NHI, the scheme would cost the country an estimated R256 billion, and according to many experts, this figure is extremely conservative.

Healthcare group Discovery estimated that 4.1% of GDP needs to be collected in additional taxes to make the NHI viable, not accounting for the R200-plus billion that would be removed from the sector through the shutting down of the private medical care industry – including medical aids.

The opposition party, Democratic Alliance, said the additional tax burden on the shrinking tax base would be back-breaking.

Research papers have shown that several taxes and tax hikes would need to be introduced to simply meet the current (understated) projections. This includes a possible payroll tax, a hike in VAT, the removal of tax credits, or other surcharges.

The other risk often cited in resistance to the scheme is the loss of skills. Health stakeholders have raised concerns that South Africa could see an exodus of doctors and other key medical personnel ahead of the planned introduction of the NHI scheme.

South Africa already faces a critical shortage of doctors and medical professionals. There is a growing concern that the country could lose even more valuable training skills as professionals look to leave.

Briefing parliament in March, the Department of Health noted these concerns, adding that the NHI will need skilled personnel to function. It said that this was not limited to healthcare professionals, but that general skilled human resources will be central to the health system going forward.

It added that the complex interactions between training, registration compliance and employment can all be substantially improved.

Despite the backlash and the research against the NHI, Health Department director-general Dr Nicholas Crisp said that the government will not back down from the policy, and will take every challenge in its stride, even if it ends up at the Constitutional Court.

More in this category: « Judgment reserved in AfriForum's appeal to overturn ban of old flag. Eskom put hopes on return of units to reduce pressure on the system. »
back to top