'I did not defame Trevor, but I stand by my statement' | JJ Tabane. 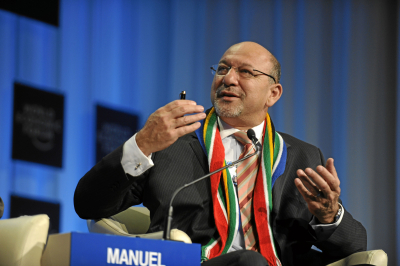 Trevor Manuel has asked television anchor JJ Tabane to apologise and retract a statement he made about the former finance minister being part of the formation of the Congress of the People (Cope).

In a letter dated 9 May, Manuel confronted Tabane regarding his interview on a podcast, "The Hustlers Corner", which was aired on YouTube three weeks ago.

During the aforementioned interview you boldly claimed that I and several others played a role in the formation of COPE.  After mentioning me you said, "They can deny all they want", and "He (in reference to me) can be as angry as he wants." Well, I am not angry but I am outraged at the falsehoods you spread.  Your statement is simply not true. You peddled this false narrative in the full knowledge of its falseness by virtue of, at least, your apparent involvement in the formation of COPE at the time.

You are an experienced highly qualified media personality. Your statements and utterances shape and influence public opinion, more so than is ordinarily the case because of your stature and own media profile. Following the aforesaid interview, the print media has now picked up on your false narrative and continues to disseminate the untruths.

In point of fact, Mbhazima Shilowa, one of the founders of COPE tweeted today, “This is all I will say about the "revelations" by @JJTabane. People should go back to what happened at the Hefer Commission especially when my friends and comrades Mo and Mac faced Moerane, not to mention Vusi and Ranjeni. One would think that people then learnt never to peddle lies."

At the time of the founding of COPE, I was a member of the National Executive Committee of the ANC. I remained as a member of the NEC until I stepped down at the 53rd National Conference that convened in Mangaung in December 2012. Your accusation that I was involved in the formation of COPE whilst an NEC member of the ANC impugns my integrity. From my perspective, you have accused me of duplicitous conduct. This incorrect perception, unless immediately retracted and corrected, can and will take hold in the minds of the public at large thereby undermining my standing in the broader South African community.

He gave Tabane "until close of business on Wednesday, 11 May 2022, to comply with my above demands", failing which, he said, he would "have no alternative but to commence legal proceedings".

Tabane meanwhile said he is sticking to his guns on allegations that Manuel was involved in the formation of ANC splinter party Cope.

"I was interviewed on The Hustlers Corner and was asked a question relating to the formation of Cope. I responded to this question and nothing in my answer was defamatory, contrary to what you (Manuel)  allege, "Tabane told Manuel.

"I therefore stand by that answer and have no intention of withdrawing it or making any apology as demanded by you. If you choose to take legal action, I will defend it vigorously."