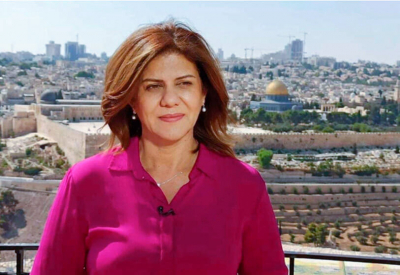 The Department of International Relations and Cooperation (DIRCO) has condemned in the strongest possible terms the killing of Al Jazeera journalist, Shireen Abu Akleh, allegedly by the Israeli Defence Force on Wednesday.

Akleh was shot in the head while on assignment in Jenin, covering Israeli raids on Jenin in the occupied West Bank. Another Al Jazeera journalist, Ali Samoudi, was also wounded after being shot in the back.

The Director-General of DIRCO, Zane Dangor, said the targeting of journalists in the occupied territories, and in conflict zones like Ukraine and Afghanistan, appears to be part of a pattern of silencing the free press, and is an outright contravention of international law.

"In a situation of occupation, protest action is one of the few ways in which Palestinians can make their voices heard. International human rights law obligates the occupying power to allow for the freedom of expression and protests.

"In other conflict zones, civilians and other non-combatants must be protected in keeping with the Principle of Distinction and other protective measures of the Geneva Conventions," Dangor said.

The Director-General said the ability of journalists to cover events as they take place is essential, and efforts to intimidate and assassinate members of the media cannot be allowed to continue with impunity.

In New York, the US ambassador to the United Nations, Linda Thomas-Greenfield, called Abu Akleh's death "really horrifying" and called for a transparent investigation.

She said protecting American citizens and journalists was "our highest priority."

Thomas-Greenfield said Abud Akleh did "an extraordinary interview" with her in the West Bank last November. "I left there feeling extraordinary respect for her," she said.

The UN Human Rights office urged for an "independent, transparent investigation into her killing. Impunity must end."

The White House also called for a thorough probe.

"We are heartbroken by and strongly condemn the killing of American journalist Shireen Abu Akleh in the West Bank," Ned Price, US State Department Spokesman, said on Twitter. "The investigation must be immediate and thorough and those responsible must be held accountable. Her death is an affront to media freedom everywhere," he added.

Earlier in the day, the US ambassador to Israel, Tom Nides, had said on Twitter he was "very sad" to learn about the journalist's killing and called for "a thorough investigation into the circumstances".

Luis Miguel Bueno, the EU’s spokesperson for the Middle East and North Africa, said on Twitter that he was "shocked" by the killing of Abu Akleh while she was doing her job reporting on Israeli raids in Jenin.

"We express our deepest condolences to her family and call for a swift and independent investigation to bring the perpetrators to justice," he said.

Agnes Callamard, Amnesty International's Secretary General, said that the killing was "a bloody reminder of the deadly system in which Israel locks Palestinians".

"Israel is killing Palestinians left and right with impunity," she added.

In a statement, Al Jazeera Media Network condemned the "blatant murder" that violates "international laws and norms" and called Abu Akleh's death a "heinous crime, through which it is intended to prevent the media from fulfilling its message".

"We hold the Israeli government and the occupation forces responsible for the killing of the late colleague Shireen," the statement said.

Al Jazeera called on the international community to hold the Israeli occupation forces accountable for their "intentional targeting and killing" of Abu Akleh.

More in this category: « 'I did not defame Trevor, but I stand by my statement' | JJ Tabane. National Dam levels record a consecutive reduction. »
back to top