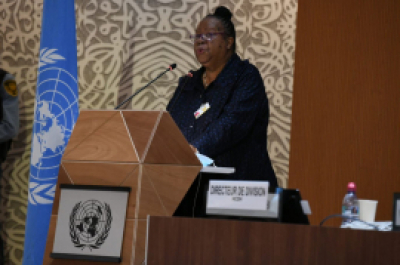 International Relations and Cooperation (DIRCO) Minister, Dr Naledi Pandor, has reiterated South Africa's position that the Russia and Ukraine conflict can only be ended through negotiations.

Pandor was speaking during a presentation of her department's Budget Vote to the Portfolio Committee on International Relations and Cooperation in the National Assembly on Thursday afternoon. The budget has increased by at least 1.3% from the 2021/21 financial year to about R6.6 billion in this financial year.

The Minister called on the United Nations to take the lead and negotiate peace between the two countries.

"The ongoing conflict has starkly exposed the inadequacy of the UN system and highlighted the need for serious attention to our repeated calls for substantive reform of the Security Council and indeed, the United Nations body itself.

"We look forward to working closely with other non-permanent members of the Security Council to urge them to initiate a genuine robust process of reform. We firmly believe that the Ukraine/Russia [conflict] will only be ended through negotiations, and urge the UN Secretary General to lead as the key negotiator to secure a cessation of hostilities, "she said.

Pandor said the conflict has undermined any new hope for the global community to adopt the UN's Common Agenda, which was presented by the UN Secretary General in 2021.

"[This] has severely eroded that hope and has divided the world once again, and diverted us from the Secretary General's common agenda. Despite our calls for a ceasefire and for UN-led negotiations, the [conflict] rages on, with millions displaced and thousands maimed and killed.

"We remain steadfast in our belief that war benefits no one, and that all efforts should focus on peaceful settlement of all disputes," she said.

Reflecting on the country’s diplomatic efforts on the continent, the Minister said South Africa has committed to supporting both UN and African Union efforts to "silence the guns on our continent".

She said closer to home, South Africa has assumed the chair of the SADC Organ on Politics, Defence and Security Cooperation.

The Minister said this position in SADC allows the country to focus "on the challenging political and security matters" in countries such as Lesotho, Mozambique, the Democratic Republic of Congo and Eswatini.

"President [Cyril] Ramaphosa's facilitation, on behalf of SADC in the Kingdom of Lesotho, continues and the national reform process is at a very critical stage. We also continue to support the SADC deployment in Mozambique as part of our region's response to the fight against extremism and terrorism.

"Our efforts at promoting democracy and good governance in Eswatini are also underway. The SADC secretariat has, through the organ troika, prepared a terms of reference for an inclusive national dialogue in Eswatini," Pandor said.

The Minister said South Africa remains concerned about the rise in the amount of "unconstitutional changes of government on our dear continent" and extremism.

"We believe these undermine our continent's efforts to realise a peaceful and secure Africa. We will work with the Economic Community of West African States (ECOWAS), as well as the African Union to combat these incidents of insecurity.

"We will redouble our efforts to hold governments accountable to build a united front against terrorism and to prevent military interventions, as well as to stop negative foreign interference on our continent, "she said.

More in this category: « KZN must 'build back better' when repairing damage from floods |Mabuza. Lamola calls on arms state to protect the independence of the judiciary. »
back to top