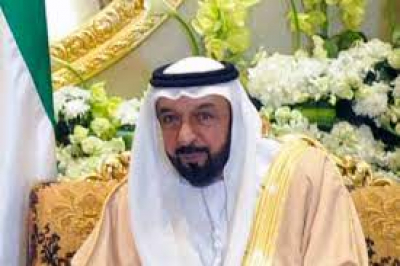 President Cyril Ramaphosa has paid his tribute to one of the richest monarchs in the world, President Sheikh Khalifa bin Zayed AI Nahyan, who died on Friday.

Sheikh Khalifa bin Zayed Al Nahyan served as the President of the United Arab Emirates since 2004.

He was the second President of the UAE and the 16th Ruler of the Emirate of Abu Dhabi. He was the eldest son of Sheikh Zayed, Founder of the United Arab Emirates.

"We offer our deepest condolences to His Highness Sheikh Mohammed bin Rashid al-Maktoum, Ruler of Dubai and Acting President of the United Arab Emirates, as well as to Sheikh Mohammed bin Zayed bin Sultan Al Nahyan, Crown Prince of the Emirate of Abu Dhabi.

"We extend our sympathies to the Rulers and royal family as well as the government and people of the United Arab Emirates, "said Ramaphosa.

Ramaphosa recalled that the late Sheikh Khalifa bin Zayed Al Nahyan presided over major political reforms and made significant contributions to the socio-economic upliftment and welfare of the people of the United Arab Emirates, which remains a global example.

"[He] will be remembered for his tireless efforts in enhancing bilateral relations between democratic South Africa and the UAE and promoting the interests of the South African government and people."

These relations were further strengthened by the state visits of former South African Heads of State.

Ramaphosa attended the South Africa National Day celebrations at the Expo 2020 in Dubai on 28 March 2022 and expressed South Africa’s honour to be part of this global event.

Sheikh Khalifa was born in 1948 and came to power as the 16th ruler of Abu Dhabi after the passing of his father, Sheikh Zayed bin Sultan al-Nahyan, in 2004.

The UAE Ministry of Presidential Affairs said it would be undertaking a 40-day official mourning period with flags at half-mast, and three days of closure of ministries and official entities at the federal and local levels and the private sector.

Other leaders who paid tribute to Sheikh Khalifa included US President Joe Biden.

"Sheik Khalifa was a true partner and friend of the United States throughout his decades-long tenure as president of the United Arab Emirates and Ruler of Abu Dhabi, and in his earlier role as Crown Prince of Abu Dhabi," Biden said.

Indian President Ram Nath Kovind and Prime Minister Narendra Modi expressed their condolences, while vice-president Venkaiah Naidu will visit the UAE on Sunday to offer condolences to the UAE leadership on behalf of the government of India.

British Prime Minister Boris Johnson will also travel to the UAE on Sunday to pay his country's respects.

More in this category: « Dudula wants officials in CT to verify the status of every foreign national in the city. Frolick implicated in state capture elected co-chair of comm. to oversee KZN disaster. »
back to top