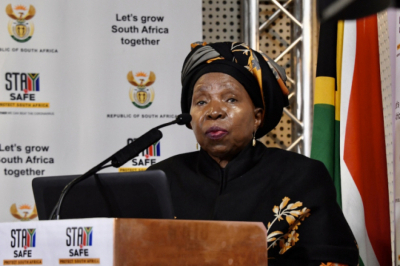 The AGSA in her report states that it is encouraging to see the slight increase in the number of clean audits as 27 municipalities were able to maintain their clean audit status with 14 having achieved a clean audit for the first time.

In a statement, the Minister welcomed the audit improvements in some municipalities but expressed serious concern about those that have regressed as well as those who have not improved

"We are encouraged that with the ongoing efforts to improve the municipal audit outcomes, there are municipalities that do get things right and become exemplary to others."

Dlamini Zuma said she continues to support the work done by the AGSA and initiatives aimed at consolidating the improvements recorded in some municipalities and supporting municipalities to implement and maintain effective systems. The systems were the areas of governance, financial management, performance management, infrastructure, service delivery and compliance with local government legislation and related prescripts.

In this regard, the Ministry said the department would implement initiatives aimed at ensuring that there was a multi-stakeholder approach with clear roles and responsibilities in supporting local government.

The Ministry said the initiative would also include:

– the municipal support intervention plans are formulated following a proper diagnostic assessment to ensure that the interventions are tailor-made for each municipality.

– role-players are held accountable for their role in the plan to ensure that there are consequences for non-performance.

The Ministry said these audit outcomes were in line with the department’s reports on the State of Local Government. In this regard, the department and National Treasury are leading the process of the development of the Municipal Support and Intervention Plans (MSIPs) in collaboration with sector departments, SALGA, provinces, and municipalities.

"We provide assistance to municipalities in the framework of the obligation that local government must enhance the lives of all persons in their jurisdiction. Municipalities must work to the improvement of peoples’ lives through the provision of basic services, ensuring economic growth as well as vibrant, resilient and climate-smart communities,” Dlamini Zuma said.

The Ministry said the AGSA confirmed that the audit outcomes, in the areas of governance, financial health, institutional matters and service delivery, of municipalities need effective coordination across all spheres of government to ensure that municipalities receive support so that they achieve their Constitutional mandates.

Noting the state of municipalities and the need to institutionalise coordination of support to municipalities, the department is implementing the support envisaged by Section 154 of the Constitution through the District Development Model (DDM) approach which at this stage has seen the establishment of three district hubs and the development of DDM One Plans for all district municipalities.

Implementation of the model, especially in local municipalities, will address socio-economic challenges and promote and retain investment in local economies.

More in this category: « Municipalities have been broken for years with little efforts to getting fixed |AG. Hawks confirm meeting with Arthur Fraser over Ramaphosa farm robbery. »
back to top