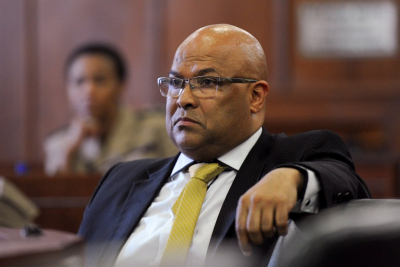 Former State Security Agency (SSA) director-general Arthur Fraser today held a meeting with the Directorate for Priority Crime Investigation (Hawks) "to assist them" in the criminal case he laid against President Cyril Ramaphosa at a Johannesburg police station.

She said the meeting was part of normal processes, in line with keeping a complainant up to date with their case.

The Hawks, who investigate serious crimes, such as corruption, were assigned the case days after Fraser laid the complaint.

Mbambo said the case was still in the early stages.

On Wednesday, in a statement, Fraser said he had a fruitful meeting with the Hawks on 15 June.

Fraser said he "appreciates the professionalism and the speed with which the Hawks responded to the complaint".

He laid a criminal complaint against the president earlier this month.

The case alleged kidnapping and money laundering against Ramaphosa and the head of the Presidential Protection Unit, Major-General Wally Rhoode.

The case pertained to a burglary at Ramaphosa's Phala Phala farm in Limpopo in February 2020.

Fraser, in an affidavit, alleged around $4 million was stored inside a couch on Ramaphosa's farm.

He said the president, instead of reporting the matter to the police, conspired with Rhoode to track down the men behind the robbery.

The men were found in Namibia and allegedly tortured, along with the domestic worker, who reportedly conspired with the men to arrange the burglary.

More in this category: « COGTA to implement initiatives to improve municipal audit outcomes. EC residents urged to adhere to water restrictions imposed by municipalities. »
back to top