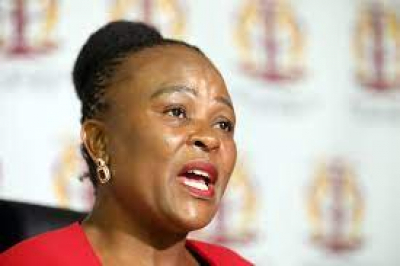 The Constitutional Court on Wednesday dismissed an application by the suspended public protector Busisiwe Mkhwebane for leave to appeal against a high court judgment which set aside her report on the early retirement of SA Revenue Service (Sars) Irvan Pillay.

The application was dismissed, with costs.

Mkhwebane approached the Constitutional Court after the Gauteng High Court in Pretoria dismissed her application for leave to appeal last year.

The high court matter was determined without an oral hearing.

At the time, the high court said: "...there is no reasonable prospect of success of the appeal. Put differently, we hold the view that there is no prospect that another court may come to a different conclusion in this case. Therefore, the application for leave to appeal and cross appeal the judgment fall to be dismissed."

Mkhwebane released her report on the Pillay matter in May 2019.

Her report found the allegations that Gordhan irregularly approved the early retirement of Pillay, with full benefits, and his subsequent retention at SARS, were substantiated. It also found that Gordhan's conduct amounted to improper conduct as envisaged by the Public Protector Act.

In her remedial action, she recommended the president take appropriate disciplinary action against Gordhan for failing to uphold the values and principles of public administration entrenched in Section 195 of the Constitution and the duty conferred on members of the Cabinet to act in accordance with the Constitution, in terms of Section 92(3)(a).

In December 2020, the court ruled that Mkhwebane's findings - which stated that Gordhan acted unlawfully - were irrational, as were her recommendations.

The court also found that Gordhan's assertions that Mkhwebane was driven by an ulterior, political agenda in her report on his role in the early retirement of Pillay are "suspicions and mere speculation".

But, in his application, Gordhan questioned the timing of the release of the report.

He provided Mkhwebane with his submissions on the findings 48 hours before she released the report.

He then contended that she could not have given this due consideration and that it wasn't considered in the final report.

The PP had recommended that the president take disciplinary action against Gordhan.

However, evidence presented during the drawn-out saga proved that Gordhan had acted on legal advice and that the practice of re-employing retirees on contract is common in the public service.

In its order on Wednesday, the Constitutional Court said it had considered the application for leave to appeal.

"It has concluded that the application should be dismissed as it bears no reasonable prospects of success," the court said in its order.

More in this category: « EC residents urged to adhere to water restrictions imposed by municipalities. South Africa should consider Russian crude imports | Mantashe. »
back to top