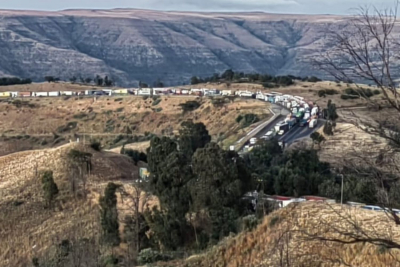 KwaZulu-Natal police have arrested four men aged between 40 and 59 in relation to the ongoing truck blockades on the N3.

This was confirmed by the KZN Provincial police spokesperson Brigadier Jay Naicker, who said that the four men were arrested for obstructing a national route, damaging or interfering with essential infrastructure, and economic sabotage.

This comes after local truck drivers embarked on a national strike against the employment of foreign nationals and blocked the N3 near Windy Corner, Van Reenen and northbound direction in the vicinity of N3 in Tweedie north of Howick.

Naicker said more arrests can be expected as investigations progress.

Naicker said the N3 at Van Reenen’s Pass has been reopened.

The protests are reportedly being driven by the All Truck Drivers Forum (ATDF) who are protesting about the rising price of fuel and the hiring of foreign nationals as drivers, among other things.

Meanwhile Department of transport said engagements had taken place with truck drivers until late on 14 June and believe they are on the verge of concluding an agreement on the proposed interventions.

The discussions were on the back of previous engagements where government took the stakeholders into confidence on the measures being implemented to address the issues previously raised, read the statement.

"We have been working around the clock with Ministers of Labour and Employment and Home Affairs together with affected stakeholders to address the issues raised by the truck drivers and small truck operators."

"We have taken note of the complaints about the sluggish pace of implementing interventions in areas that we have agreed on."

A follow-up engagement is scheduled for Sunday, 19 June 2022, with all stakeholders, said the department.

"We therefore call for an end to the blockade of the roads and for truck drivers to allow the engagement process to run its course, concluded the statement.