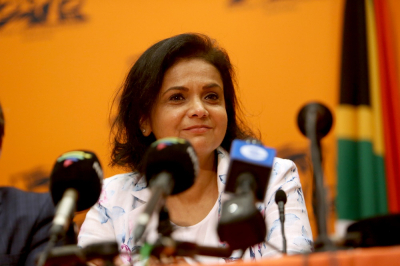 National Director of Public Prosecutions Shamila Batohi said that the "complete failure" of local government to tackle corruption was stretching the National Prosecuting Authority (NPA) to the limit.

She said that the lack of controls and maladministration in municipalities was having an impact on the NPA’s resources.

The head of the National Prosecuting Authority (NPA) was speaking during the NPA’s presentation to the Select Committee on Cooperative Governance and Traditional Affairs, Water and Sanitation and Human Settlements.

"There has been steady progress being made by the NPA and its partners, in particular with regard to municipal matters. The challenge of resources was always an issue but we have vigorously capacitated in order to be able to deal with this. There's been a lot of work that has been done in this space. The NPA now has a full leadership team, including permanent appointments in the regions,” Batohi said.

She said despite progress, too many municipalities still lack the systems to prevent corruption at the first instance and the volume of investigations and prosecutions of municipal corruption is a reflection of this.

"Where we are right now is because of the complete failure on the part of municipalities to do their work properly and ensure that there are systems and processes in place that do not allow for corruption to take place. Our constrained resources are really being stretched to the limit because of the lack of systems and controls in the municipalities to deal with these issues.

"Our national anti-corruption strategy deals specifically with the proactive part of it because if things are done properly upstream, then law enforcement will not be burdened with this downstream,"she said.

Batohi told the committee that the NPA is facing several internal and external challenges in its bid to root out and prosecute corrupt individuals.

These include a shortage of skills and staff – which she said is receiving attention – and the “disappearance” of crucial proof in municipalities.

"There’s a huge responsibility on those in charge of municipalities now to work very closely with law enforcement to ensure that we’re able to get the evidence that we need to bring these cases to court.

"One of the challenges… is of evidence disappearing within the municipalities. That is a serious concern and there should be systems and processes put in place to ensure that evidence in the municipalities is properly protected. That is, at the end of the day, something that will determine the success of cases,"she said.

The head of the NPA said the high number of municipal-specific matters is draining both financial and human resources.

"It costs us a lot of money. In addition to the money that has been lost because of the failure of municipalities, it’s costing the country even more money now to hold people accountable, as well as in terms of asset recovery, to try to bring back the stolen money.

"The numbers are increasing and… sentences of direct imprisonment are being handed down to the accused.... [From] asset recovery… there have been millions of rands that have been recovered. But of course, there’s still a lot more work that needs to happen in this space," she said.

Batohi said the NPA is working closely with the Directorate for Priority Crime Investigation (DPCI) – known as The Hawks – to ensure that cases move quickly from the investigation stage to prosecution.

"We recently had a three-day workshop with the DPCI and members of the NPA looking at how we collectively organise ourselves to focus on high level corruption. Many municipalities will also be involved in that space, so there is a lot that’s been put in place to ensure very close collaboration between the DPCI and the NPA to ensure that cases move more swiftly through the system,"she said.

More in this category: « Police arrests four people for 'economic sabotage' during N3 blockade. South Africans urged to respect and protect rights of older persons. »
back to top