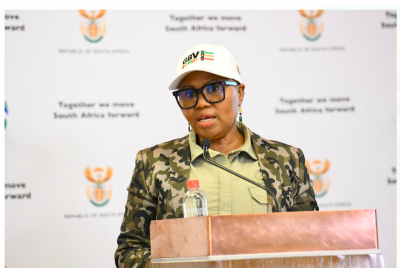 Social Development Minister, Lindiwe Zulu, has called upon South Africans to respect, defend and uphold the dignity, integrity and safety of older persons.

The Minister said this in commemoration of World Elder Abuse Awareness Day which occurs annually on 15 June. The day seeks to prioritise the protection of the lives and the wellbeing of the country’s older persons. It is also about raising awareness about the need for access and meaningful participation in the digital space for senior citizens.

This year’s commemoration is held under the theme: "Digital Equity for All Ages".

South Africa has confirmed that it has an ageing population with estimates indicating that the proportion of older persons aged 60 years and older, has grown from 7.6% in 2002 to 9.1% in 2020.

It was projected that by 2015 the proportion of older persons in South Africa will have increased to 9.5% of the population, that is, 4.24 million older persons.

In July 2020, about 5.43 million people in South Africa were aged 60 and above. This older persons’ population increase heightens the concern about elder abuse and neglect.

Historically, World Elder Abuse Awareness Day was initiated by the International Network for the Prevention of Elder Abuse (INPEA) in 2006 and recognised as a United Nations Day by the General Assembly in its resolution A/RES/66/127 adopted in 2011.

In a statement on Wednesday, the Department of Social Development (DSD) said that this day is intended to raise public awareness of elder abuse and remembrance of those who have died as a result of elder abuse.

"Older persons face various kinds of mistreatments and discrimination. Elder abuse is a global public health, human rights, and criminal justice problem. It goes beyond socio-economic classes, regions, languages and ethnicities, but remains an understudied and under reported phenomenon,” the department said.

The DSD said that the COVID-19 pandemic has demonstrated how technologies can help fight the spread of the virus, sustain daily life, support business continuity and keep people socially connected.

"It has also shown that those who are excluded from the digital transformation were older persons who are at an increased risk of being permanently left behind. Digital equity for all ages is, therefore, more important than ever”.

In response to these challenges, Minister Zulu, emphasises that “digital technology is a key component to fully participate in society through their independence which can be realised as they access information easily, and stay connected with their families and friends”.

Zulu has also encouraged older persons to participate in intergenerational programmes and provide mentoring and coaching of new and emerging professionals and younger generations.

The department added that as the older persons are recovering from the impact of COVID-19, the devastating floods in KZN and Eastern Cape also remain a blow to the recovery plan in South Africa, especially, the impact it had on the lives and wellbeing of older persons.

This year’s commemoration coincides with two important events, namely, commencement of the United Nations Decades of Healthy Ageing (2022-2030) which marks the beginning of ten years of concerted collaboration with diverse stakeholders on improving the lives of older people, their families and communities in which they live.

The second event is the 20th milestone of the Second World Assembly on Ageing and the fourth review and appraisal of the implementation of the Madrid International Plan of Action on Ageing (MIPAA).

"In support of these international occasions, the South African government recently finalised the Older Persons Amendment Bill and Chapter five of this legislation focusses on strengthening intersectoral collaboration for the effective protection of older persons and management of abuse of the elderly, "the department said.

In addition, through the DSD, government facilitated the establishment of the Older Persons Abuse Register, an initiative managed in partnership with the Department of Justice, through the Integrated Justice System.

The training of the system users and key stakeholders is currently underway across provinces since the year 2021 and training continues during this financial year to ensure the capturing and processing of all reported cases of abuse of older persons.

Through this initiative, the department has reached over 200 social workers, as well as key stakeholders in the field of ageing, which should lead to an improved reporting, successful prosecution and safety of older persons.

"In commemoration of this day, the Minister would like to encourage all South Africans to ensure that we leave no older person behind as we move into the digital space.

"Such exposures should lead to the empowerment of older persons, thus ensuring their ability to respond to their varied instances of abuse. We also pause to remember all senior citizens who succumbed to the COVID-19 over the recent years,"the department said.