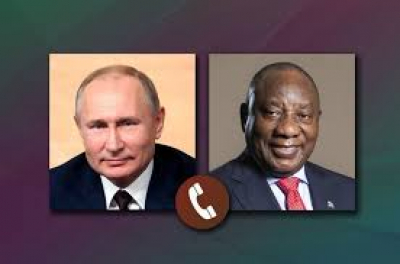 "The presidents expressed satisfaction with the current level of the two countries 'strategic partnership and stressed the shared intention to expand mutually beneficial cooperation, above all in trade, the economy, and investment," a Kremlin press release said.

Ramaphosa's spokesperson, Vincent Magwenya, confirmed the call had taken place and that "the two leaders held a discussion on issues of trade and investment and the BRICS partnership".

The discussion was also in the context of the upcoming BRICS summit next week, he added, referring to the annual summit of the BRICS partnership — comprising Brazil, Russia, India, China and South Africa. The summit will be hosted by China, but will take place virtually.

The importance of joint work within the framework of the BRICS group in order to further strengthen the role of this association in world politics and the economy was noted," the statement read.

The Kremlin said Ramaphosa had initiated the call and that the two leaders had agreed to maintain contact.

Sall said afterwards that Putin had pledged to address the food crisis but he did not elaborate. Russia has blamed it on Western sanctions imposed on Russia because of its invasion of Ukraine.

Western governments insist that the grain shortage, in particular, has been caused mainly by Russia blockading Ukrainian ports and preventing exports.

On Thursday, the Russian News Agency reported that Russia was cooperating with its partners in the Eurasian Economic Union (EAEU) and BRICS nations in the green energy area.

Earlier this week, during a debate by members of the National Assembly on rising fuel prices, Mineral Resources and Energy Minister Gwede Mantashe suggested that South Africa should look no further than Russia to source cheap crude oil despite mounting international sanctions being imposed on the country for its invasion of Ukraine.