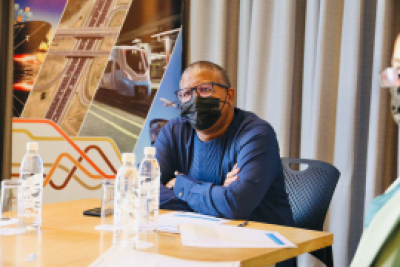 Transport Minister Fikile Mbalula said a truck driver made an error which resulted in the horrific crash in which 15 people lost their lives on the Hornsnek Road near Ga-Rankuwa, north of Tshwane.

Addressing a media briefing on Friday, Mbalula said it was established that weather conditions at the time of the crash were clear and this was ruled out as a contributory factor.

The accident occurred on 10 June 2022 in the early hours of the morning around 5h10. The bus was traveling in a southerly direction with 56 passengers on board. The truck carrying furniture was traveling in the opposite direction. The bus veered from its original lane and into the path of the bus resulting in a head-on collision.

"The report concluded that driver error is the major contributing factor to the cause of the crash because the truck driver allowed his vehicle to veer off its original lane of travel onto the oncoming lane resulting in a head-on crash," Mbalula said.

The road was also found to be in fair condition and not likely to have been a cause of contributory factor in the crash.

"A full mechanical investigation was conducted on both vehicles and confirmed that there were no mechanical defects or failures that contributed to the occurrence of the crash. It was found that both vehicles were in a roadworthy state before the crash.

"The report further states that both drivers had valid EC1 drivers’ licenses and Professional Driving Permits (PrDPs), though one of the drivers was a foreign national, he had all the required documentation including the valid register,"the Minister said.

Mbalula said both of the drivers died in the accident and no one can be charged for either reckless and negligent driving and or culpable homicide.

"In these circumstances this matter will be the subject of an Inquest and the Presiding Officer (Magistrate) assigned with this case will have to make a finding after the leading of evidence by eyewitnesses.

"Road crashes involving busses and trucks are a matter of grave concern to the Department of Transport and government in general. These crashes place a heavy burden on the health sector and the economy as they involve a high number of fatalities where the victims are economically active members of society.

"The pain is felt deeply by households that are left without breadwinners and children who are left orphaned without a parent to guide them through the challenges of life," he said.

An analysis conducted by the Road Traffic Management Corporation (RTMC) on major crashes involving busses and trucks countrywide from January 1 2020 to 15 June 2022 revealed the following.

Trucks were involved in 71 major crashes in which 463 people were killed and 431 suffered various degrees of injuries.

"Clearly, this is an unsatisfactory situation because we know that road crashes are avoidable if people exercise necessary and respect the rules of the road.

"The RTMC will in the next few days urgently convene the National Road Safety Steering Committee (NRSSC) to look at impactful interventions that need to be implemented by all provincial and local traffic authorities to bring down the number of horror crashes in the country," the Minister said