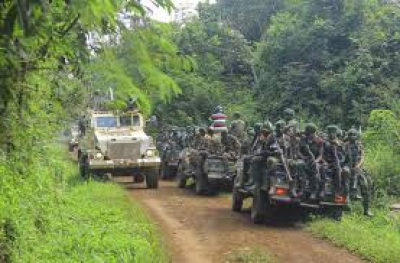 (Reuters) - Security has deteriorated in two provinces in the eastern Democratic Republic of the Congo (DRC) since the government placed them under military rule last year, United Nations experts have said.

Last April, the government declared a state of siege in North Kivu and Ituri provinces in response to escalating attacks by militias, including repeated massacres by the ISIL (ISIS)-linked Allied Democratic Forces. (ADF).

The state of siege placed the provinces under the authority of military governors. Dozens of militias have remained active in North Kivu and Ituri since the end of a major regional war in 2003.

"Despite a state of siege … the security and humanitarian situation in the two provinces deteriorated," said a report submitted by the UN Group of Experts on the DRC to the Security Council on Friday.

It said the ADF had been dispersed by military operations but remained resilient, stepping up its attacks on civilians. "This escalation in the number of attacks and killings of civilians was part of ADF reprisal tactics, which were also aimed at dissuading operations against ADF, "the report said.

According to data from Kivu Security Tracker, which maps violence in eastern DRC, the ADF was responsible for 1,050 violent deaths in 2021, double the number in 2020.

DRC's government spokesman did not immediately respond to a request for comment. He has previously denied the state of siege has been a failure, pointing to successes on the battlefield.

Uganda, another of the DRC’s neighbours, also sent troops in November to conduct joint operations with DRC forces against the ADF, which originated in Uganda.

Violence by other militias is also on the rise, the experts said.

The M23 rebels, who captured swaths of eastern DRC in 2012 before being beaten back the following year by Congolese troops and UN peacekeepers, launched a major offensive last month that has captured several strategic towns.

DRC accusers neighbors Rwanda which invaded it twice in the 1990s, of backing the rebels and sending its own troops across the border. Rwanda denies this.

The UN experts did not reach a conclusion on whether Rwanda was supporting the M23, although research for the current report concluded before the rebels stepped up their offensive.

More in this category: « Ankole Heifer auctioned off for R1.65m with Ramaphosa's Bull selling for R650k. Eight illegal foreigners caught trying to enter SA illegally at OR Tambo airport. »
back to top