Ramaphosa honours Mbeki for his wisdom and contributions to democratic SA. 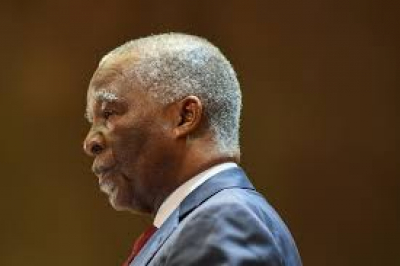 Former President Thabo Mbeki celebrated his 80th birthday. Mbeki served as the second president of the democratic SA from June 14 1999 to September 2008.

Mbeki - marked this major milestone in a glitzy dinner celebration in Sandton on Saturday night, attended by amongst other dignitaries, former statesman, Kgalema Motlanthe.

In a pre-recorded message, President Cyril Ramaphosa praised Mbeki, saying that he continues to enrich South Africa's public life with his presence, council and participation.

"It is cause for celebration to have reached this milestone and good health, carried by a good spirit and as always, wonderful humour. 80 years is said to be an oak jubilee where the oak tree symbolises strength, endurance and wisdom. Such is your place in South Africa's public life.

"You continue to enrich our country's public life with your presence, your participation and your counsel."

On the 20th anniversary of the adoption of the constitution, you said a leader should not lie but understand the challenges.

"It is more important now than ever that we remember why we've been elected. We were not elected to distract our people with false hope and promises," Ramaphosa said.

"We want to tell you that we are steadily rebuilding our country back. We're rebuilding, restoring the economy and creating opportunities for our people

Ramaphosa also thanked Mbeki for his advice over the years.

My message to President Thabo Mbeki - my comrade, my brother, my leader - on the occasion of his 80th Birthday Celebrations #TM80 pic.twitter.com/U7qqNOk9AC

Mbeki has reminisced about the time he tried to join the ANC Youth League when he was just 10 years old.

He says he joined the party four years later, in 1956, and has been a member ever since.

He also recounted the time he thought it was time to retire.

Mbeki was born in 1942 in the former homelands of Transkei in the Eastern Cape. As one from a family of political activists, the young Mbeki joined the ANC Youth League at the age of 14, becoming a student activist in politics.

After his schooling was interrupted by a strike in 1959, Mbeki completed his studies at home.

He then moved to Johannesburg where under the guidance of Walter Sisulu and Duma Nokwe, he became the Secretary of the African Students’ Association.