Final state capture commission report to be handed over on Wednesday. 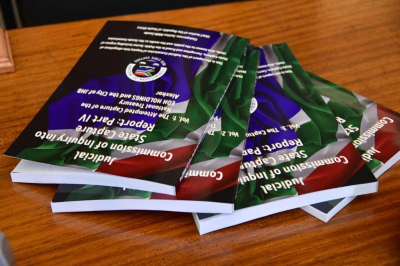 The final report on the state capture commission of inquiry will be handed over to President Cyril Ramaphosa on Wednesday, in Cape Town.

Earlier Ramaphosa's spokesperson, Vincent Magwenya, said the president discussed "the timing of the handing over of the final Commission report" with Chief Justice Raymond Zondo this morning.

Magwenya says a new date for the handover will be announced soon.

However, in a subsequent statement on Monday, the inquiry confirmed the report would be handed over on Wednesday.

It said due to, "... challenges processing Part V and VI of the Report on time for the handover to the President by 18:00 today, 20th June 2022, it has been agreed to move the event to Wednesday, 22 June 2022 the original handover date in Cape Town".

The final report was about 1 824 pages long, with seven volumes.

"In the interest of quality and reduction of unavoidable errors and as a result of calendar logistical problems, it has become necessary to allow for a responsible and proper completion of the conclusion of the report.

"The commission apologises to the public and all concerned for this further delay. The patience and support of the public is highly appreciated."

The commission was given a deadline of 15 June to complete its work and submit the fifth volume of the state capture report to the president.

On Saturday, the commission announced that it was not able to submit the final volumes of its report to the president on 15 June due to certain challenges.

However the electronic report will now be certainly submitted to the president during the evening [on Sunday], 19 June . The handover ceremony will take place on Monday, 20 June, at the Union Buildings in Pretoria at 6pm.

Meanwhile the Democratic Alliance (DA) in statement says the delay in the release of the final report of the Commission of Inquiry into State Capture,  as a result of a meeting between Ramaphosa and Zondo earlier today to discuss the timing of the handover, is wrong and deeply unethical.

"This constitutes a dangerous and unacceptable interference in the judicial process which casts a long shadow over both the independence of South Africa's judiciary, and the credibility of the Presidency. At a time when trust in the Presidency is at an all-time low, any suggestion that the President may be interfering with the independent work of the Commission or manipulating the timing of the report's release is rightfully met with suspicion."

"It is unheard of for any individual, who is the subject of an investigation being conducted by the state's law enforcement and judiciary, to be able to manipulate the content of an investigative report or the timing of its release. It is astounding that the President sees nothing wrong in attending this meeting. The delay of the court-mandated deadline for the release of the final report, seemingly at the hand of the President, should set alarm bells ringing, read the statement."

The President of the Republic has no right to delay or obstruct justice, and one can only assume that Ramaphosa is seeking to delay the release of the final Report for two reasons: because it directly implicates him in state capture, and because the timing of the release is inconvenient given the current controversy surrounding the theft of 4 million US dollars from his Phala Phala farm in 2020, added the DA."

DA calls call on both Ramaphosa and Zondo to take the country into their confidence and urgently issue statements explaining the nature of their meeting, who initiated it, and why it was permitted to go ahead, given the evident conflict this presents with the principles of independence and justice.

More in this category: « Eskom implements Stage 2 load shedding from 5pm. Seven arrested for excessive speeding in Gauteng. »
back to top