Ministers adopts an action plan to address the trucking challenges. 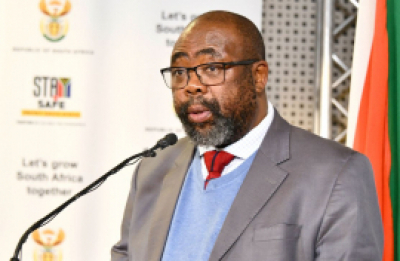 In his address, Nxesi, says there is no shortage of skilled truck drivers in the country.

"Both the Department of Employment and Labour and the Department of Home Affairs have reported that while some operators have asserted that South Africa lacks skilled truck drivers, the inspections and law enforcement operations have found that truck driving was an abundant skill in South Africa and therefore not a scarce skill as purported by some operators, "Nxesi said.

"To mitigate this, and restoring peace and stability, the Road and Freight Inter-Ministerial Committee (IMC) has been engaging with disgruntled truck drivers to find an amicable solution.

"To this effect the IMC met with employees and employers of the industry on Sunday, 19 June 2022, to report on progress made since January 2022 to resolve these challenges affecting the industry," Nxesi said.

The Department of Home Affairs reported they have conducted over 21 joint multi-disciplinary law enforcement operations and inspections to assess the extent of use of foreign and at times illegal truck drivers.

"These multi-disciplinary and joint enforcement operations conducted across the country saw 213 arrests of foreign truck drivers found to be in contravention of immigration laws with 19 of those in possession of fraudulent documentations.

"The Department of Transport also reported on its responsibilities on the matter and the report details elements of an Action Plan drafted to tackle the challenges from the transport department’s point of view," the Minister said.

The Action Plan derives from a culmination of a series of meetings held with the industry and will form part of a blue print to be announced once approved by all parties.

The Implementation Plan consists of the following actions:

-Facilitate the appointment of the task team;

-Enforcement of the VISA requirements;

-Need for consideration of all foreign driving licenses;

-Registration and compliance with labour laws;

-Registration of operators in term of Section 45 of the National Road Traffic Act (NRTA);

-Review of the Traffic Register Number;

-Consideration of the introduction of Operating Licenses for the industry.

"The parties in attendance at the meeting agreed unanimously with the elements of the Implementation Plan except for the Road Freight Association’s misgivings with the introduction of Operating Licenses (action 11).

"Each organization participating in the process will be represented by two delegates and monthly report meetings will be held by the IMC to review progress on actions being implemented," Nxesi said.

The IMC was formed with the Ministries of Employment and Labour, Transport, Home Affairs and Police to deal with escalating road blockages and protests by disgruntled South African truck drivers.

The Minister said the IMC felt that these protests and blockages have adverse impacts on mobility, scares foreign investors and most importantly very negative impacts on the economy and essential supply chains using affected corridors.

"The IMC has formed a task team constituting Directors-General from the four Departments that make up the IMC. The task team is charged with conducting research work and plot a plan of action for the resolution of the challenges affecting the industry and report to the IMC," Nxesi said.

Also present during the media briefing was Mbalula, Motsoaledi, as well as Cele.

Mbalula expressed appreciation to all stakeholders for the drafting of the Implementation Plan.

"Today marks a milestone in a road we have travelled in finding consensus around issues that were raised with government by the trucking industry. We have responded because our economy has been battered by these activities," the Minister said.

More in this category: « Presidency denies judicial interference amid delays of final part of state capture report. FlySafair to add new routes across Africa after rival’s collapse. »
back to top