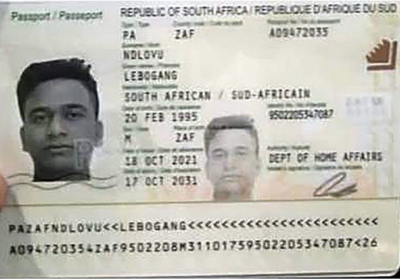 A Department of Home Affairs official is expected to appear in the Benoni Magistrate’s Court for a bail hearing on Tuesday on allegations of corruption.

The Home Affairs Counter Corruption Branch, working with the Hawks and other law enforcement agencies, on Monday nabbed the official for fraudulently issuing a passport to "Lebogang from Bangladesh".

The official worked at the Benoni Home Affairs office and is on suspension while her disciplinary hearing is scheduled to take place this week.

Fahim Kazi, known as "Lebogang from Bangladesh", was arrested while trying to leave the country on 12 May 2022.

At the time of Kazi’s arrest, Home Affairs Minister Aaron Motsoaledi, said the clampdown on the use of fraudulent South African documents was bearing fruit as the department knew which corrupt official issued the fraudulent passport because the official had been on the radar of the counter corruption branch.

The Minister also assured the country that the official would be arrested and face the full might of the law.

More in this category: « FlySafair to add new routes across Africa after rival’s collapse. DA wants FBI to probe Ramaphosa money laundering claims. »
back to top