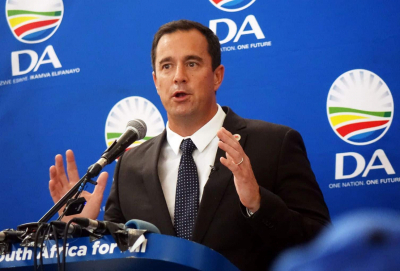 The Democratic Alliance (DA) has announced more steps to ensure that president Cyril Ramaphosa is held accountable for his failure to publicly disclose all the relevant details surrounding the theft of four million US dollars from his Phala Phala residence in 2020.

The DA has written to the United States FBI (Pretoria Field Office) to request that they investigate allegations of possible money laundering by the President.

DA leader John Steenhuisen said: "Specifically, we have requested that the FBI considers investigating the source of the funds and whether the money was brought into South Africa legitimately and declared to the appropriate authorities."

Steenhuisen said there were questions for Ramaphosa and those who stole the funds at his home. He said the FBI had to probe this matter further.

"We have recommended that the ledgers or journals which would have recorded the alleged sale of wild game at auction be requested from the president, to determine the identities of those involved in the suspicious cash transactions.

"A cash transaction within South Africa involving $4 million is deeply suspicious, and more so since the cash was then hidden in furniture, and its theft investigated off-the-record and covered up," Steenhuisen said on Tuesday at a media briefing.

Fraser, who was the national commissioner for the department of correctional services until last year, said in his complaint to the police that "the quantum was speculated to be in the region of approximately US$4 million to US$ 8 million". He was referring to the amount of money he said had been stolen from Ramaphosa's farm.

While Ramaphosa has confirmed that a robbery occurred at his farm in 2020 in which he said proceeds from the sale of game were stolen, he denied claims of criminal conduct.

The Department of Justice and Correctional Services meanwhile has confirmed there is no record of a request for mutual legal assistance from the Namibian Police Force (Nampol) in relation to the robbery at Phala Phala farm in Limpopo.

The ministry said it has closely followed media reports and a statement by Nampol concerning a request for mutual legal assistance in respect of a suspect by the name of David Imanuwela.

Chrispin Phiri, the spokesperson for the department, said there are established procedures for serving requests for mutual legal assistance including liasing with diplomatic officials.

"We can confirm that, to date, all requests for mutual legal assistance have followed these processes without any complications between the two states Namibia and South Africa. We can categorically state that, to date, there is no official record of this specific request."

The president, who is expected to seek re-election as leader of the governing African National Congress party at a gathering due to be held in December, has offered to appear before the ANC's integrity commission, which looks into any unethical or immoral conduct that may involve its members.

More in this category: « Home affairs official issued passport to 'Lebogang from Bangladesh' appears in court. Joe Phaahla recommends the scrapping Covid-19 regulations. »
back to top