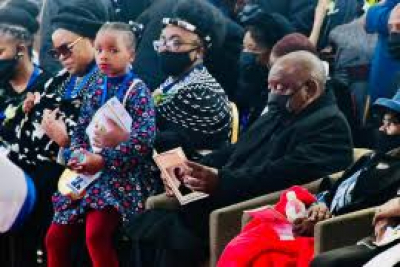 President Cyril Ramaphosa has hailed the late King of amaMpondo, Zanozuko Tyelovuyo Sigcau, as an exemplary traditional leader, who was passionate about developing his area.

Ramaphosa said King Sigcau's name shines in the pantheon of the traditional leaders of the country who fought gallantly against dispossession and exploitation, and fought for a better life for their people.

The president was delivering the eulogy at the funeral service of the late King of amaMpondo at Flagstaff in the Eastern Cape Province on Tuesday.

Ramaphosa accorded the King a special official funeral Category 1. He was inaugurated as King of the amaMpondo nation in 2018.

The Statesman said that this was a sad and difficult day, a devastating loss for the family, the nation and the institution of traditional leadership.

"When we received the news of the illness of his Majesty King Zanozuko, we believed that he would recover and continue with his duties of leading our people. Sadly, this was not to be. He left us, in the prime of his life, when we were still expecting much from him," he said.

The President emphasised that when His Majesty King Zanozuko Sigcau was confirmed a few years ago as the King of the AmaMpondo, that occasion heralded a new era for the Kingdom.

He said that it held the promise of peace, unity, development and cooperation among amaMpondo.

"Working with local government, civil society and his community, His Majesty immediately set about to implement development projects to advance the interests of our people in this place. He visited other Kings to discuss issues of unity and development of their people," Ramaphosa said.

When Ramaphosa visited the area in November last year, he said that he met with His Majesty the King and other kings and traditional leaders and members of the communities.

The President met with the leadership of AmaMpondo ase Qawukeni and amaMpondo ase Nyandeni to discuss the need for effective consultation on all development programmes in these areas.

Speaking about his interactions with the late King, the President said that he had the privilege of discussing the Eastern Seaboard Development Initiative with the King.

"I was impressed and enriched by his vision of socio-economic development. He impressed me with his extensive analysis of the terrible conditions in which our people live in these parts of our country.

"He knew exactly what challenges exist in this area and the many opportunities and endowments we should use to improve people’s lives,” the President said.

Ramaphosa said Kumkani Zanozuko appreciated the socio-economic impact of this initiative and how it could benefit the impoverished and underdeveloped AmaMpondo communities.

"He took it upon himself to champion the Eastern Seaboard Development Initiative and started engaging other affected Kingships urging their support. King Zanozuko was passionate about involving communities as investors in the initiative through land ownership.

"To His Majesty, local communities were the first investors in the initiative, whose views and interests should guide the process," he said.

With the Eastern Cape being one of the provinces with high unemployment and poverty rates, the President said government counted on His Majesty’s visionary leadership in this and many other projects to transform the socio-economic conditions of his people.

He said the late King was among those monarchs who are determined that economic development should not be confined to the urban centres of the country.

"He was one of those leaders who championed the Invest Rural Master Plan, a flagship project promoted by the National House of Traditional and Khoisan Leaders.

"His Majesty's passing left many tasks unfinished and took from us a beacon of development, social norms and values. We are called upon to take forward his mission," the President said.

The President further hailed His Majesty as a true father of the nation, who reviled the migrant labour system, where his people, particularly men, leave their families behind and move to far-away places to seek employment.

More in this category: « Joe Phaahla recommends the scrapping Covid-19 regulations. Eskom extends stage 2 load shedding from Wednesday to Sunday. »
back to top