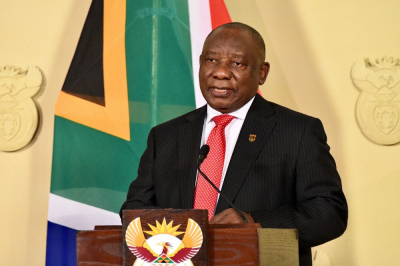 President Cyril Ramaphosa has called on BRICS to support the drive of the African Union to ensure that vaccines destined for African countries are procured from African manufacturers.

Ramaphosa was delivering a pre-recorded message at the opening ceremony of the BRICS Business Forum on Wednesday ahead of the virtual 14th BRICS Leaders’ Summit on Thursday and Friday.

Though the global economic recovery is underway, Ramaphosa highlighted that the situation remains fragile and the recovery itself is uneven.

He said that developing economies continue to face challenges of poverty and inequality, which the COVID-19 pandemic has only exacerbated.

"Lack of access to lifesaving vaccines and treatments is still holding back the recovery of millions across the world.

"We cannot have a swift and inclusive global economic recovery unless the issue of vaccine inequality is urgently addressed," the President said.

Ramaphosa said that the forum is taking place at a difficult time.

As BRICS nations, he said, they have to do all within their means to mitigate the impact of poverty, food and energy insecurity on the people.

"We have to advance sustainable and inclusive development that safeguards us against future shocks. At the Moscow Summit in 2020, we adopted the revised Strategy for BRICS Economic Partnership. Last year, we adopted its Implementation Plan," he said.

Through this strategy, the President said that they want to expand market access for goods, products and services across the bloc.

"We want to promote mutual trade and investment, implement structural reforms and other measures to improve the business environment.

"In particular, we want to enhance trade and investment cooperation that supports value-addition among the BRICS countries," the President said.

The President told the Business Forum that South Africa has recently implemented far-reaching structural reforms in areas such as energy, telecommunications, transportation, water and infrastructure.

Despite the pandemic, he said that trade and investment cooperation within the BRICS has been steadily improving.

"This needs to be deepened even further if we are to withstand vulnerabilities in regional and global supply chains. We therefore endorse the BRICS Initiative on Enhancing Cooperation on Supply Chains," he said.

He emphasised that this initiative affirms that openness, efficiency, stability, transparency, reliability and resilience of national, regional and global supply chains are necessary preconditions for international trade and investment.

"We are committed to strengthening dialogue, exchange and cooperation in areas such as industrial development, investment, trade in services, and micro, small and medium enterprises development. We recognise the dynamism of the digital economy as an enabler of the global economic recovery," the President said

Ramaphosa also called for an urgent need to overcome the digital divides that exist within and between countries.

He said that BRICS countries will continue their constructive engagement with the World Trade Organisation (WTO) to foster inclusivity, industrialisation and development.

"We appreciate the contribution of the BRICS Women Business Alliance in promoting women's financial inclusion and the participation of women and women-owned and women led businesses in the mainstream economies of BRICS countries.

"We must oppose attempts to shape global economic policies through unilateral sanctions and other coercive measures," he said.

At the same time, Ramaphosa emphasised the need to preserve the pre-eminent role of the WTO in setting global trade rules and governance, in supporting inclusive development and in promoting the rights and interests of its members.

The President further wished the BRICS Business Forum well in the critical task of expanding and diversifying trade and investments between its countries.

"Our task is to forge new pathways for cooperation that bring higher levels of development for our respective peoples. We extend our appreciation to the BRICS Business Council for its ongoing work of deepening collaboration among the BRICS business communities,"he said.

Ramaphosa added that this year’s BRICS Business Forum is an opportunity to move beyond solidarity to real action.

"As BRICS leaders and as the BRICS business community, let us deepen our collaboration and partnership in pursuit of global development that benefits all and that leaves no-one behind,"he said.

More in this category: « Eastern Cape officials warn of "collapse" of health service. NPA confident in team working on Gupta extradition process. »
back to top