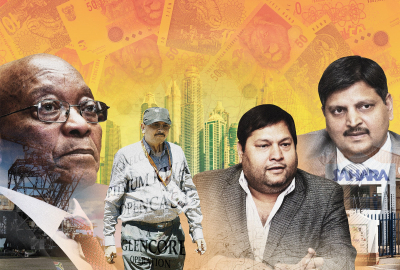 The National Prosecuting Authority (NPA) says it has full confidence in its team of highly skilled prosecutors working on the legal aspects of the Gupta extradition process.

Atul and Rajesh Gupta were arrested in Dubai earlier this month after a red Interpol notice was issued for the brothers who were wanted for widespread graft, fraud, and money laundering.

In a statement, the NPA said a core team of prosecutors is leading the process, with the support of several private counsel, as necessary, to assist with the finalisation of the formal extradition request.

The authority said extradition processes are complex and each one has its peculiar dynamics, depending on the country involved.

NPA spokesperson, Mthunzi Mhaga, on Wednesday said the NPA had already submitted the requests for provisional arrest warrants through the appropriate channels -- a formality that needed to be complied with.

He said: "In terms of the extradition treaty between South Africa and the United Arab Emirates (UAE), South Africa has 60 days from the date of arrest to submit the formal extradition application.

"The NPA is on track to finalise this process, in close consultation with relevant authorities in the UAE and INTERPOL as required, acting in full compliance with domestic and international legal obligations relating to extradition."

He said diplomatic and political aspects are being dealt with in parallel by colleagues in the Ministry, the Department of Justice and Department of International Relations and Cooperation.

"We have previously explained why we will not be commenting on the legal dimensions of the case at this early stage, and this remains our position for important legal and case-specific reasons. However, we note with concern the widespread misinformation and speculation about how the NPA and its leadership is handling this complex legal process.

"While we recognise the public interest in this matter, we must focus on delivering on our constitutional mandate and responsibilities without distraction, and without fear or favour. The NPA welcomes constructive criticism."

However, he said, recent irresponsible reports about the NPA's apparent poor handling of the process, or failing to respond to UAE requests, are not accurate, and should be dismissed as dangerous speculation, or politically and personally motivated attacks to undermine the NPA and its leadership during this process.

The NPA appealed to all South Africans to allow it, and all other stakeholders officially mandated to manage this process, to do so in a manner that will let justice prevail.

More in this category: « Ramaphosa calls on BRICS to support AU drive to manufacture vaccines locally. Hlophe granted leave to appeal 'gross misconduct' finding at the SCA. »
back to top