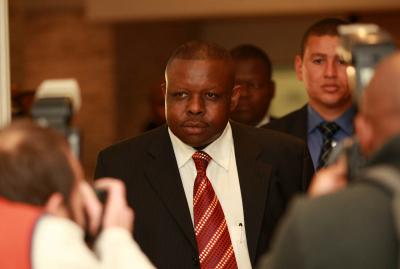 Western Cape Judge President John Hlophe has been given the right to challenge a ruling that paved the way for his potential impeachment.

While finding that Hlophe's leave to appeal application lacked merit, a full bench of the Gauteng High Court in Johannesburg, however, granted it saying it "raised matters of significant public importance" - due largely to the fact that Hlophe may become the first judge in South African history to be impeached.

According to Wednesday's ruling, Hlophe's application was sound as it consciously referenced Section 17 of the Superior Courts Act, which provided for the granting of an appeal where compelling reasons exist for it to be heard.

Hlophe made the application after the high court dismissed his challenge to gross misconduct findings against him and a Judicial Service Commission (JSC) process that could lead to his impeachment.

Last month, a full bench rejected his argument that, rather than voting on whether he should be impeached, the matter should be referred to the National Assembly to re-hear the allegations as part of its own investigation.

Acting Judge President Aubrey Ledwaba, Deputy Judge President Roland Sutherland and Judge Margaret Victor this week found that the arguments presented by Hlophe were recycled and the contentions were "no more persuasive by being repeated".

"Notwithstanding the view that we take of the lack of merits in the application, it is plain that the case has raised matters of significant public importance. The controversy embraces both the obvious and several nuanced issues of critical significance to the administration of justice," the judges found.

"These include the integrity of the judiciary as a whole and the norms by which it falls to be held accountable and the proper functioning of the Judicial Service Commission."

The matter has implications for the parliamentary process and the aspects of the case went beyond the "personal predicaments", merits or demerits of his case, the judges ruled.

"Moreover, although the machinery of the disciplinary process of the JSC has been previously the subject of judicial scrutiny, the peculiar issues of law raised in this case regarding the composition of the Judicial Services Council and the effect thereof on the validity of its decisions… have not previously been examined by a court."

The case, the judges found, raised "discrete issues of public importance that will have an effect on future matters".

Last year, Hlophe was found guilty of impeachable gross misconduct for trying to sway Constitutional Court Justices Bess Nkabinde and Chris Jafta to rule in favour of former president Jacob Zuma relating to the validity of searches during the arms deal investigation.

More in this category: « NPA confident in team working on Gupta extradition process. Zondo hands over fifth and final part of the state capture report. »
back to top