Zondo hands over fifth and final part of the state capture report. 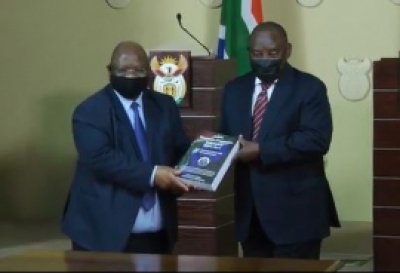 Chief justice and commission chairperson Raymond Zondo handed over part five of the report to President Cyril Ramaphosa at a ceremony at the Union Buildings in Pretoria at about 6.30pm — after the delay of two and half hours.

Addressing the media at the official handover ceremony, Zondo said his team had had sleepless nights finalising the report.

"There were certain challenges but we were determined that the handover should happen today. I really appreciate your patience and understanding. For the past more than two to three hours. I really apologise," Zondo said.

He said the delay was not intentional and was unavoidable.

The commission was given a deadline of 15 June to complete its work and submit the fifth volume of the state capture report to the president.

On Saturday, the commission announced that it was not able to submit the final volumes of its report to the president on 15 June due to certain challenges.

However the electronic report will now be certainly submitted to the president during the evening [on Sunday], 19 June . The handover ceremony will take place on Monday, 20 June, at the Union Buildings in Pretoria at 6pm.

In the morning of the 20th of June 2022, Ramaphosa and Zondo held a brief telephone call in which the Chief Justice offered reassurance on the delivery of the report and discussed the coordination for the handover ceremony.

A tentative date of Wednesday 22 June 2022 was therefore agreed due to this further delay, and to Ramaphosa being scheduled to deliver the eulogy at the Official Funeral of King Zanozuko Sigcau on Tuesday, 21 June 2022 in Flagstaff, Eastern Cape.

Ramaphosa explained the engagements between himself and Zondo that have been criticised as interference.

He said the conversation was initiated by Zondo who called to say that he would not be able to made the scheduled time.

"I cannot accept the innuendos that have been made that there was any way that the chief justice and I could have discussed the substance of the work."

"Even if he has made a negative finding against me I will accept (that) and that is the basis on which we deal with each."

The president added that Zondo had been "honest, fair and did his work with integrity".

Ramaphosa reiterates that he will present the full State Capture report to Parliament within the next four months - as well as his response to its findings and recommendations.

He says the evidence and testimony given at the Commission will be archived.

The commission has already submitted four volumes of the state capture report to the Presidency.

The inquiry was announced in early 2018, and tasked with investigating allegations of state capture along with public sector corruption and fraud

The work of the commission comes to an end after over four years of hearings, hundreds of witnesses, thousands of summons and over eight million pages of documents.