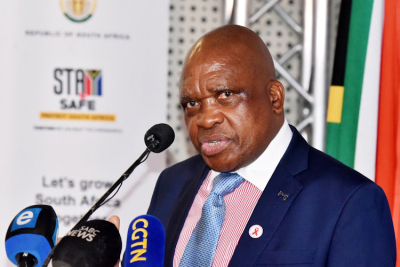 Wearing of masks, limits on gatherings, and border checks – including for vaccination status – have been dropped.

Minister of health Joe Phaahla published a notice in the Government Gazette on Wednesday repealing the country's Covid–19 regulations.

"I Mathume Joseph Phaahla, minister of Health hereby repeal Regulations 16A, 16B and 16C of the Regulations Relating to the Surveillance and the Control of Notifiable Medical Conditions… in their entirety," the two-paragraph notice states.

"The repeal of the regulations concerned will come into operation on publication in the Gazette."

South Africa has been hardest hit by the coronavirus pandemic in Africa recording more than 100,000 deaths and more than 3.7 million infections since the outbreak started in 2020. In recent weeks it has seen a significant drop in COVID-related deaths and severe illness.

Omicron was first identified in southern Africa in November driving a spike of the disease but now that wave has diminished and South Africa is in a period of low transmission, according to health experts.

Phaahla and minister in the presidency Mondli Gungubele will brief the media tomorrow at 11:00 about cabinet deliberations after the health department advised that Covid-19 restrictions should be dropped.

They were expected to announce that President Cyril Ramaphosa and his cabinet had signed off on ending the last major restrictions relating to Covid-19, first imposed during what was expected to be a lockdown of three weeks.

The mask mandate and other restrictions had originally been imposed under the authority of a national state of disaster. When that was discontinued, the same rules were imposed under the power granted to the health minister to deal with notifiable medical conditions.

By repealing three sections of those regulations, "in their entirety", Phaahla with immediate effect ended those obligations.

The government has been under pressure from various sectors to lift COVID-19 restrictions, which are blamed for the losses of 2 million jobs in a country with an unemployment rate of more than 34%.