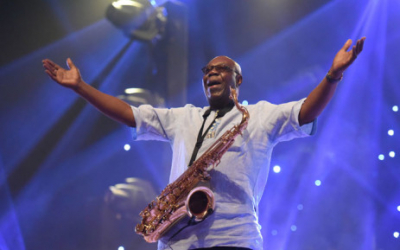 FILE: In this file photo taken on 29 June 2018 Cameroon jazz saxophonist Manu Dibango performs during a concert at the Ivory Hotel in Abidjan. Picture: AFP.

The African saxophone legend Manu Dibango has died in Paris after catching coronavirus.

Dibango - best known for his 1972 hit Soul Makossa - is one of the first global stars to die from Covid-19.

The 86-year-old fused jazz and funk music with traditional sounds from his home country, Cameroon.

He collaborated with numerous artists over a long career, including US pianist Herbie Hancock and Nigeria's Afrobeat pioneer Fela Kuti.

The Cameroonian musician filed a lawsuit in 2009 saying Michael Jackson had stolen a hook from his song, Soul Makossa, for two tracks on the world's best-selling album, Thriller. Jackson settled the case out of court.

“It is with deep sadness that we announce you the loss of Manu Dibango, our Papy Groove,” a statement on his official Facebook page read.

His funeral will take place in “strict privacy”, the statement read, asking instead for people to send condolences by email and adding that a tribute will be arranged “when possible”.

On Twitter, Kidjo shared a video, recorded two months ago, of her rehearsing the end of Soul Makossa with Dibango.

"You're the original giant of African music and a beautiful human being," the Beninois performer wrote.

Verified
Dear #ManuDibango, you’ve always been there for me from my beginnings in Paris to this rehearsal just 2 months ago! You re the original Giant of African Music and a beautiful human being. This coda of #SoulMakossa is for you! pic.twitter.com/3pGoICwjCn

Born in the Cameroonian city of Douala in 1933, which at the time was under French colonial rule, Dibango’s musical career spanned across more than six decades.

He grew up in a religious Protestant family, the AFP news agency reports, and his first musical influences came from the church.

"I'm a child raised in the 'Hallelujah'," he is quoted as saying.

But he drew on many influences and was well known for his eclectic style.