Vantage delivers it's first data centre in Joburg ahead of schedule. 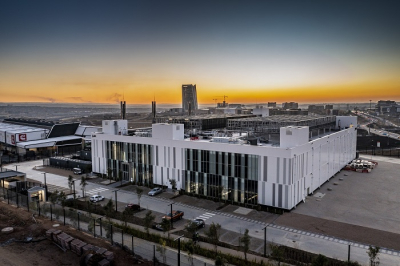 Vantage Data Centers, a global provider of hyperscale data centre campuses, has delivered its first facility on its Johannesburg campus – 10 months ahead of schedule.

The launch marks the group's first data centre in Africa after breaking ground in 2021.

The two-story facility offers 16MW of critical IT capacity across 12,000 square meters. The project was delivered in 10 months, 10 days ahead of schedule, with zero lost-time incidents, the group said.

With an investment totalling more than $1 billion (R17 billion), Vantage’s 12-hectare campus will ultimately include 80MW of IT capacity and more than 60,000 square metres across three data centres once fully developed.

Our rapid turnaround on the construction of our first Johannesburg facility has allowed us to more quickly meet the demand for hyperscale data centres in the area," said Justin Jenkins, chief operating officer, EMEA at Vantage Data Centers.

The group also said that it was working towards sustainability goals, committing to offering renewable energy options, limiting carbon emissions and maintaining energy-efficient operations in the industry.

In June, it announced it had entered a 20-year power purchase agreement (PPA) with SolarAfrica to support the production of 87MWp of renewable energy to supplement the local grid that powers the campus.

More in this category: « 17 more arrested following women's rape and robbery in Krugersdorp. Step-aside rule seems to be more of a headache for the ANC. »
back to top