Malema express his gratitude to EFF supporters at the anniversary celebration. 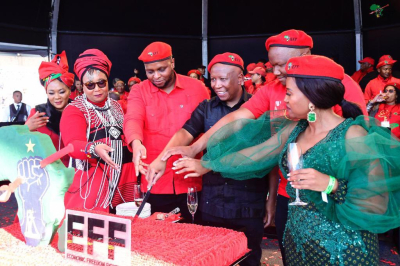 The Economic Freedom Fighters (EFF) celebrated its ninth anniversary at Dr Molemela stadium in the Free State on Saturday.

Thousands of party supporters filled the stadium in Mangaung to celebrate the party's anniversary.

The party has seen significant growth since its formation in 2013, with many wondering if the survival and growth of the party are dependent on Malema solely and if the party has a chance of staying in power should he step down as leader.

During his keynote - Malema said the party has achieved significant growth.

"We have members of legislature in all the legislatures of South Africa. We've got members of parliament, members of NCOP, we've got councillors in almost all municipalities within a space of nine years."

Malema expressed his gratitude to the supporters who'd ensured the party's survival.

"Many have said how EFF would die, and it would never make it to a year. The doomsayers said it would vanish into thin air. Little did they know we are permanent residents of South Africa and Africa, and we are not going anywhere."

He also said giving up was not an option and they weren't fighting against the ANC, but for socialism to be realised, "not only in South Africa but all over Africa".

Also attending the anniversary, were leaders from the South African Federation of Trade Unions (SAFTU), ATM as well as the United Democratic Movement (UDM).

More in this category: « ANC proposes complete overhaul of SA's immigration system. Eskom applies for a massive increase to fund a new energy plan. »
back to top