ANC retains the step aside rule to enhance the integrity of the party. 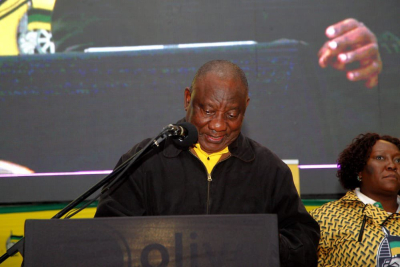 An effort to mount a rebellion against President Cyril Ramaphosa at the ANC policy conference has been neutralised.

The ANC in KwaZulu-Natal appears to have conceded that their primary fight will occur at the December elective conference. A planned protest against Ramaphosa led by Carl Niehaus did not attract any support.

"This is just a consultative conference. We will be back in December with our numbers where we can win by a vote."

This was the sentiment of the ANC in KwaZulu-Natal, who were expected to lead any rebellion during the ANC's policy conference, but who failed to achieve substantive political wins on which opposition to Ramaphosa was expected to ride on.

The main fight of the conference, repealing the ANC's step-aside policy, appeared to be moot by Sunday.

Ramaphosa meanwhile said the party had decided to retain its rule that anyone charged with corruption or other crimes must step down while they are being investigated.

The overwhelming view of the policy conference is for the retention of the 'step-aside' provisions to enhance the integrity of the movement and its leadership," he said to loud applause.

Ramaphosa has taken a harder line on corruption since taking over as ANC leader in December 2017.

Scrapping the rule would have allowed potential challengers to vie against him for the ANC ticket in 2024 presidential elections - especially Ace Magashule, who was suspended as party secretary general last year after being charged with corruption.

The party will chose its candidate at the end of this year.

Ramaphosa himself faces a police investigation of his finances after thieves stole $4 million from his farm in June, and his opponents are hoping to use this to unseat him.

If he is charged with any irregularity - such as failing to declare the money to tax authorities or violating exchange controls - then he himself might be forced to step aside.

Ramaphosa says the money was proceeds from sales of game animals on the farm, and has welcomed the investigation.

Opening the conference on Friday, the president scolded the ANC for losing public trust, saying the party was weaker than at any time since it ended white minority rule in 1994.

The ANC has been in power for nearly three decades, but it faces public anger over worsening electricity blackouts, poor or non-existent basic services, a sluggish economy, corrupt procurement tenders and crime-related shootings.

The policies proposed at the conference will be considered by branches ahead of the ANC national conference in December.

More in this category: « Senegal elects parliament in test for ruling party's influence. Morocco king favours restoration of diplomatic ties with Algeria. »
back to top