Death toll in the Tembisa electricity tariff protest has risen to four. 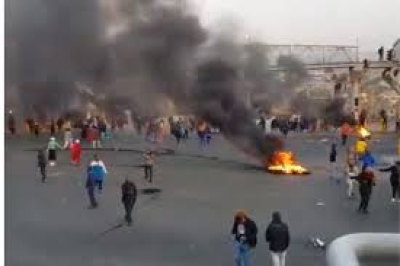 The Ekurhuleni Metro Police Department (EMPD) has confirmed that two more people have lost their lives during the Tembisa service delivery protests on Monday.

The two bodies were found near the Customer Care Centre, where the Municipal Centre was set alight. This brings the death toll to four.

EMPD spokesperson Kelebogile Thepa said the SAPS had taken over the investigation to establish the causes of their deaths as authorities were currently dealing with unsubstantiated allegations.

The Ekurhuleni Municipality Customer Care Centre and municipal and private vehicles were set alight during the protest, and there had also been sporadic instances of looting.

The first and second fatalities were reported in the morning, after protesters were caught in the crossfire between officers and other demonstrators.

The Tembisa Community Forum distanced itself from the shutdown, saying the protests were unplanned.

The Independent Police Investigative Directorate (Ipid) was in Tembisa investigating the deaths.

The angry residents were protesting against high electricity tariffs.

Ekurhuleni Mayor, Tania Campbell called for calm to be immediately restored. She said such acts of arson and vandalism to public infrastructure will not be tolerated.

She said last week she delegated five members of the mayoral committee to engage residents on the memorandum they had submitted, however that meeting unfortunately collapsed and failed to reach any resolutions.

Motorists have been urged to avoid major roads in the area and to opt for alternative routes as the area remains volatile.