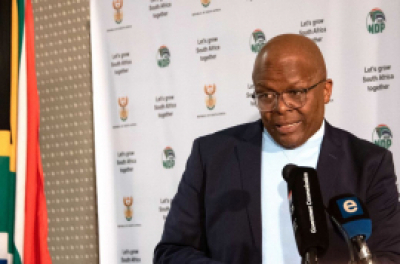 Minister of mineral resources and energy Gwede Mantashe says that "anything that is not forbidden is allowed" when it comes to sourcing power for South Africa.

This includes his position on power ships and establishing a second state-owned power utility in the country.

Speaking at a media briefing alongside other ministers of the Energy Crisis Committee, Mantashe said that sourcing energy from power ships is not off the table. However, he said that if the power ships need to comply with regulatory technicalities, such as environmental assessments, they must still do so.

Mantashe stressed that power ships are not forbidden from doing business in South Africa.

The Karpowership, which produces power from gas-fired plants mounted on ships, has been challenged by environmentalists, however.

Looking beyond the power ship issue, Mantashe also broached the topic of an 'Eskom 2.0' – a second state-owned power utility to supply bulk load for the country's energy needs.

Mantashe said the option of a second state-run power utility is not a dead idea, adding that old coal-fired power stations that are earmarked for decommissioning should be repurposed and possibly used with gas.

The formation of a state-owned power utility has been shared within the ANC and even got an approving mention from President Cyril Ramaphosa.

Prior to the latest ANC national policy conference, the ANC economic transformation chair Mmamoloko Kubayi said that she hopes 'Eskom 2.0' becomes an adopted policy in the party.

The delegates at this past weekend's conference mooted that Eskom and other state-owned companies be rehoused in their line departments.

If adopted at the ANC's national conference in December, Eskom would be moved to the Department of Mineral Resources and Energy.

Mantashe also reported that the bid submission deadline for Bid Window Six (BW6) of the Renewable Energy Independent Power Producer Procurement Programme would be delayed by between 45 and 60 days to ensure procedural fairness in light of Ramaphosa's announcement that the size of the round would be doubled from 2 600 MW to 5 200 MW.

The bid submission date for BW 6 was initially set down for August 11, after the request for proposals (RFP) documentation was published on April 6.

He said a formal notice of the extension would be made soon.

Trade, Industry and Competition Minister Ebrahim Patel said that localisation "flexibility" had been introduced to address the difficulties that some of the 25 BW 5 preferred bidders were having in meeting local content requirements.

These difficulties were said to be partly responsible for delays in the projects progressing to financial close, which was initially scheduled for April, but which had since been shifted to a two-stage deadline of July and September respectively.

Patel said the 100% local-content designation for solar PV modules had been reduced to 35% and that those bidders continuing to face delays or difficulties in timeously securing modules from the two local producers – ARTSolar and Seraphim – were entitled to apply for a full exemption.

"This is a wide deviation and it's been put in place because we believe it's most helpful to the economy and at the same time it's been structured to enable local production of some of the demand from local producers,"Patel explained.

He added that localisation targets would be increased incrementally during future bid windows.

Meanwhile Public enterprises minister Pravin Gordhan said the first step to getting more capacity to the grid was to get a better power output from Eskom’s existing power stations.

We have identified six power stations which are going to get a lot of attention in terms of maintenance, "Gordhan said.

"By maintenance, we mean getting parts ready, getting contracts ready, having the money available, having original equipment manufacturers available if we need them."

These "top 6" power stations, as Gordhan referred to them, include Duvha, Kendall, Kusile, Majuba, Matla, and Tutuka.

It should be noted that "top 6" likely does not refer to performance, as Eskom has revealed on several occasions that Lethabo is among its best-performing plants.

The second step involves getting approval from Mantashe to bypass the "standard purchasing process" regarding purchasing power from independent producers.

"Current IPPs are not using necessarily all of the power that they produce, so they have a surplus," Gordhan stated.

Eskom requires consent to buy surplus power that is available from current IPPs, and up to 1,000MW is potentially available in the next three months."

He said there is the potential for another 600MW that can connect to the grid but added that triple exemptions from section 34 of the Preferential Procurement Policy Framework and Public Finance Management acts would have to be approved first.

"Those are processes my colleagues are working on,"Gordhan added.

He said that a further 100–200MW of power could be added to the grid within a month through negotiations with the SAPP.

"Here, somewhere between 100 and 200MW could be available in the period of a month, depending on the contracting mechanisms and agreement on price," Gordhan said.

Regarding fraud and corruption at Eskom, Gordhan said that while some progress has been made, a lot of fraud is still evident.

More in this category: « Death toll in the Tembisa electricity tariff protest has risen to four. Mamabolo welcomes commencement of e-hailing mediation process. »
back to top