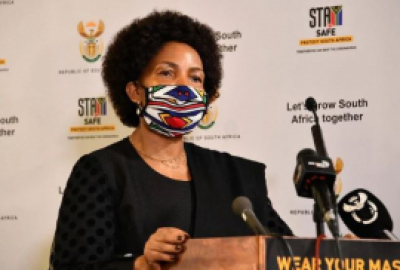 Minister in the Presidency responsible for Women, Youth and Persons with Disabilities Maite Nkoana-Mashabane has expressed shock and anger following the gang rape of eight women in Krugersdorp, West of Johannesburg.

The incident took place on Thursday, when a group of young women were shooting a music video and were approached by a group of men who raped and robbed them of their belongings, including clothes and other valuables.

Nkoana-Mashabane said the war declared by men against women in the country must be met with the harshest response and sentences.

"We cannot continue as normal when women in their diversity are statistics and live in constant fear in a free country. Unemployment is high and to hear that these young women were shooting a music video when they were approached by a group of men who raped and robbed them of their belongings is despicable, "Nkoana-Mashabane said.

She said the department is coordinating its response to support the women violated in this despicable manner.

"As more details come to light, I am angered by the depravity displayed by these vile perpetrators. We plead with SAPS to continue to search for the perpetrators and bring those responsible to book. The eight women must have justice served.

"The law must take its course, but in cases of this nature the justice system must show no mercy when sentencing these perpetrators. These perpetrators must receive harsh punishment for their crimes, as there is no place in society for them,"the Minister said.

President Cyril Ramaphosa has directed the law enforcement agencies to ensure that the culprits are apprehended.

According to police, the deployment of drone technology to assist officers on the ground to track suspects in the mining area has resulted in the arrest of at least 84 people. Two suspects died during a shoot-out with police and while another wounded suspect is recovering in hospital.

All suspects appeared in the Krugersdorp Magistrate’s Court on Monday, 1 August. They face charges of contravention of the Immigration Act and possession of suspected stolen goods.

More in this category: « DStv ordered to reinstate four dropped eMedia TV channels. Government to take on Eskom debt, details to be outlined in MTBPS in October. »
back to top