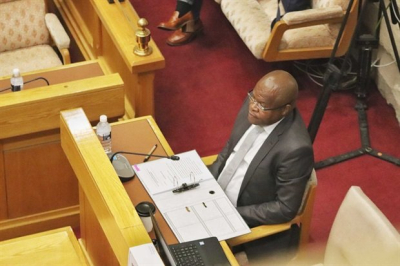 Section 194 inquiry was established to determine if there are grounds for the removal of Advocate Busisiwe Mkhwebane as Public Protector.

Mahlangu has previously confirmed that a "public furore erupted about his appointment at the PP's office because the circumstances of his dismissal from the Department of Rural Development and Land Reform were linked to the responsible Minister, Gugile Nkwinti".

Nkwinti later successfully challenged Busisiwe Mkhwebane's findings that he had violated the Executive Ethics Code, in relation to his role in the Bekendvlei Proactive Land Acquisition Strategy Project after claiming that some of the evidence against him had come from Mahlangu.

Mahlangu has been vague about his reasons for leaving the PPSA. But, in February 2020, the Public Servants Association (PSA) labour union said in a letter to Parliament's speaker Thandi Modise that it formally requested that Mkhwebane not accept Mahlangu's December 2019 resignation, which it views as "another way of abdicating accountability for his actions within the PPSA [Public Protector of South Africa]".

The union asked Parliament to institute an investigation into "maladministration and the purging of employees". Union representatives will now embark on a process to gather evidence from its members to support its case.

Mahlangu, has denied allegations that he has victimised and abused staff during his tenure.

Basani successfully challenged a High Court ruling on the basis that it did not have jurisdiction to hear her "labour matter".

In a unanimous judgment penned by Justice Leona Theron, the Constitutional Court found that the High Court erred in dismissing Baloyi's case because it was "essentially a labour dispute".

"Accordingly, her appeal against the High Court’s finding on jurisdiction must be upheld and the matter be remitted to the High Court, Gauteng Division, Pretoria for a hearing de novo (anew)."

However, the court pointed out that the Labour Court did not have exclusive jurisdiction over labour matters, unless legislation mandated it, and that such matters could also be heard by a High Court.

"The exclusive jurisdiction of the Labour Court is engaged where legislation mandates it, or where a litigant asserts a right under the LRA (Labour Relations Act) or relies on a cause of action based on a breach of an obligation contained in that act," Theron wrote.

"In sum, the mere fact that a dispute is located in the realm of labour and employment does not exclude the jurisdiction of the High Court."

Mahlangu also denied that the disciplinary action he took against PP officials were at her behest or in consultation with Mkhwebane.

More in this category: « Senzo Meyiwa murder trial postponed to September. South Africa may be hit by Stage 2 load shedding at short notice. »
back to top