More than 40 zama zamas arrested between Randfotein and Krugersdorp. 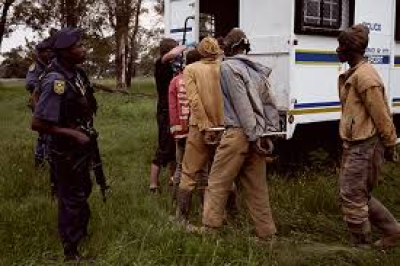 Police have arrested more than 40 zama zamas at a mine dump on the R28 between Randfontein and Krugersdorp on Tuesday, 2 August.

Minister of police Bheki Cele said dozens of pieces of mining equipment and gold-bearing material were also recovered at the mine dump.

"We refuse to co-govern with criminality," Cele said at the scene.

"The state has to rise ... I’m happy that even the mining industry is working with government."

Police have exchanged gunfire with men believed to be illegal miners in Krugersdorp.

[LEAVING NO STONE UNTURNED] disruptive @SAPoliceService operations in West Rand continue. Over 40 people have been arrested so far pic.twitter.com/IHBCshLpPQ

For most of the morning, voice notes and notifications have been doing the rounds warning motorists to avoid the R28 due to the operations. It seems the road is now clear but motorists have been advised to remain cautious.

* This story is ongoing and has been updated.

More in this category: « South Africa may be hit by Stage 2 load shedding at short notice. Al Qaeda leader Ayman al-Zawahiri killed in drone strike, Biden says. »
back to top